Soderberg: From the Biology Lab to the White House 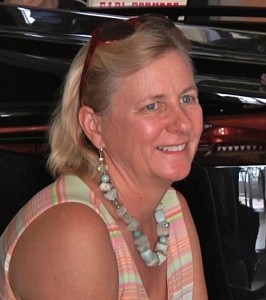 As a little girl, Nancy Soderberg dreamed of becoming a marine biologist and breaking the dolphin language code.

However, in college, she quickly discovered biology was not her calling.

“I still remember the day of my sophomore year in college watching amoebas splitting, and thinking ‘I don’t want to do this the rest of my life,’” Soderberg said.

Soderberg, now a visiting distinguished scholar at UNF, has since had a glowing career in politics. But it took her a few years of searching to figure out what she wanted to do.

The year after the amoeba incident, Soderberg went to France. She came back to Vanderbilt University and got her bachelor’s degree in French with a minor in economics. She worked at a bank for a few years but was bored silly, she said.

After that, Soderberg attended graduate school at Georgetown University and studied development economics, thinking she would try to save Africa.

At Georgetown she met her professor and mentor Madeleine Albright, who later became the first woman to be secretary of state.

“She saw something in me that I didn’t know existed,” Soderberg said. “I had never been and wasn’t the least bit interested in politics, but I finally agreed to do it and she got me my first job in the presidential campaign in 1984.”

At 25, Soderberg figured out what she wanted to do for the rest of her life.

After working for two losing presidential campaigns in the 1980s and as Sen. Ted Kennedy’s foreign policy assistant, Soderberg became the third-ranking person on President Bill Clinton’s National Security Council. She never dreamed that would happen, she said.

On the council, Soderberg dealt with Haiti, Bosnia and Vietnam. She also negotiated the cease-fire with the Irish Republican Army in Northern Ireland, which she said was her most memorable experience in Clinton’s administration.

She said the fun part of working in the White House was the luxurious state dinners because she got to mingle with Oprah Winfrey and other famous people. She also loved traveling in Air Force One because she didn’t have to pack her own bags or wait for traffic. It was sheer fun, she said.

In January, President Barack Obama appointed Soderberg as the chair of the Public Interest Declassification Board. She said it is an entity set up by Congress to have a better balance to keep information classified but also to give the public its right to know what its government does.

Valerie Ceballos, a UNF alumna who graduated in Spring 2012 with a double major in political science and international studies, said Soderberg empowered her.

It was through Soderberg’s support, encouragement and teaching that Ceballos traveled to China, Hong Kong and Japan for seven months, and got an internship at CNN, she said.

Soderberg quickly evolves from being just a teacher within the first week, Ceballos said.

“I called Nancy crying, and she answered my phone call while she was in Paris,” Ceballos said. “Now I’m hungry for life. Nancy triggers that within you.”

In early June, Soderberg announced she would be running for Florida state senate.

Ceballos said it is important for UNF students to support Soderberg’s campaign. Teachers like Soderberg are the golden ticket to putting UNF on the map, she said, and UNF students need to do everything possible to make her stay at the school.

Brett Waite, a 2010 UNF political science alumnus who is also Soderberg’s campaign coordinator, said Soderberg will talk to you just like she has known you for 10 years.

She gives students her personal email and responds within a day, or even hours, Waite said. She is all over the place with her interests in Washington D.C. and in Jacksonville, he said, but she maintains connectability with her students wherever she is.

Waite said Soderberg has built up the political science department at UNF. The whole department is becoming an entity with get-togethers in Washington D.C. once a month, he said.

Soderberg said she can make a bigger difference at UNF than Ivy League schools.

It really changes lives, she said, and it puts students at UNF on a level that they never thought possible before. It shows students they can do anything they want, and it’s really fun to watch them go do it.

Mejgan Zia, a 2008 public relations UNF alumna and former student of Soderberg’s who is volunteering for the campaign, said Soderberg had the options to work for schools like Princeton and Harvard, but chose UNF because that’s where she thought she could be most effective.

“She did not take her talents and background to people who already have a lot of that, she brought it to the public” Zia said. “That’s what I consider important to be a public servant.”

Soderberg teaches at UNF Mondays and Tuesdays and then travels to Washington the rest of the week, where she is the president of a non-profit Washington organization called The U.S. Connect Fund, which promotes responsible U.S. global engagement, human rights, climate change and development.

She comes back to Jacksonville on the weekends to relax, play tennis, golf, swim, and boat, she said. She also has a consulting agency for international relations in Jacksonville called Soderberg Solutions.

Soderberg has written two books, which she teaches in her classes at UNF. “The Superpower Myth: The Use and Misuse of American Might” and “The Prosperity Agenda.”

Soderberg’s advice to students is to think of undergraduate school as a menu of things to taste, and then work for a few years and go to graduate school when you really know what you want to do. She said until you have that feeling in your stomach that, “I can’t believe I’m lucky enough to go do this,” then you’re not in the right job.