Hashtag Controversy: #unf might not mean what you think 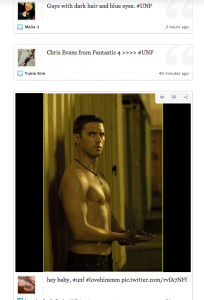 Using a simple hashtag such as #UNF when tagging a post about our University seems harmless enough, but that simple three-letter abbreviation may mean more than you think.

The hashtags use the # symbol to identify topics in a Tweet, and were originally created by Twitter users for categorizing their tweets.

Some people who use #unf may simply be identifying their tweet or blog post with campus activities such as graduating, watching a sports game or cramming for finals in the library.

The problem with using the #UNF hashtag is that if you are posting something along the lines of, “I love Ozzie! Go Ospreys! #unf,” people might get the wrong idea.

#UNF has a couple of different meanings on the Internet, and most of them are probably not something you want to be doing to our school’s mascot.

Urban dictionary has two different definitions for the term. “1. Common word used on Tumblr when seeing a hot person. 2. Universal Noise of…” well you can guess what F means.

The Spinnaker asked students around campus if they had heard about or seen anyone using the controversial hashtag.

“I know it stands for universal noise of f——. I saw it on Twitter,” said Cathryn Currie a nursing freshmen.

University public relations at UNF is aware of the controversial hashtag, but Assistant Vice President for Public Relations Sharon Ashton declined to comment.

Courtney McCleistei, a business freshmen, said that when one of her friends originally showed her the hashtag she thought it was referring to the University, but she was quickly informed of the hashtag’s true meaning.

Professor of linguistics Ronald Kephart said he had also stumbled upon the vulgar definitions when looking up UNF on a search engine.

“I did look it up just to see,” said Kephart. “I found two things. I found UNF being short for ‘You Need F’ing.’ I also found a reference to UNF being an attempt to represent the sound somebody might make [when having sex].”

If you’re counting, that’s three definitions of UNF online that don’t mean University of North Florida, and each of them are equally coarse.

The next time you post something online, you might want to think twice about using that abbreviation.

After all, you would not want people to think you like Thomas G. Carpenter that much.