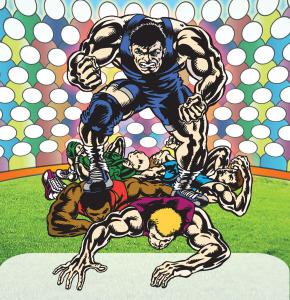 The UNF Rugby team will display its six-year evolution as a team April 25 at Hodges Stadium, at its annual Alumni Game.

Both former and current UNF rugby players, or Deadbirds as they’re known, will face off against each other in the game. This is only the second time the Deadbirds have played on the field at Hodges Stadium.

Two former students, JD Perrault and Nate Lee, founded the club in 2003, which was coached during the inaugural season by Spinner Howland, the current coach of the Jacksonville Axemen, the local semi-pro team.

“The team has come leaps and bounds since the first season,” Howland said. “They have changed and evolved over time and gained lots of support.”

The Deadbirds have developed a unique identity for themselves in their six years of existence, with steady growth in players and a solid fan base. The team currently has 30 players, with seven of those players having experience playing with the semi-pro Axemen.

The rugby team has been successful, in part, because of the support they have been able to find, Howland said. But getting out in the community to find potential sponsors and reaching out to the Axemen also played a role.

The team also benefited with the extra attention brought in by the international rugby teams who have used UNF’s facilities.

The Deadbirds are limited in their resources as a club sport. The club funding is not great, President Nick Shea said, but they are involved with sponsors in the community, which helped pay for different fees, equipment and advertising.

The rugby club only gets between $300 and $500 from Student Government and Club Alliance each semester, which is supposed to cover their operational fees. The team does not have any scholarships because it is not part of the Athletic Department, nor do they get excused absences from class if they have to miss class for a game or practice. Currently, the team practices at an off-campus recreation park because the fields the team used to use at UNF are closed for repairs.

Rugby is growing in Florida, and UNF is one of the premier teams, said Greg Van DerGriff, collegiate director of the Florida Rugby Union.

UNF came out strong last season, and it was good to see because it is organized and well prepared, he said.

UNF went to the Florida Cup Finals after going undefeated during the regular season last fall. It defeated teams from across the state before losing to Florida Atlantic University in November.

And rugby isn’t just a Florida sport. According to USA Rugby National Office, rugby participation rates in the U.S. are rapidly expanding; there are currently 63,000 registered players. Collegiate membership has also increased 25 percent in the past three years.

Admission is free to view the UNF collegiate team. The game begins April 25 at 3 p.m. at Hodges Stadium.