In high school Ms. Porubski, told Grechen Fields there was a way to get “free money” for college.

The way was FAFSA.

But this “free money” did not come at a small cost. Fields spent about a week collecting all the documents necessary to complete FAFSA. She then spent three hours filling out the application.

This wouldn’t be the last of it— Fields didn’t realize she made mistakes in some of the seemingly minor details required. She was sending the application back and forth with her school for two months before it was finally mistake-free.

The application has 130 questions regarding income, family and dependency. Senators recently signed a bill that would not only save some students a substantial amount of time and tylenol, but potentially increase college enrollment.

Incoming freshmen and current students will no longer need to submit a FAFSA in order to receive Bright Future Scholarships, effective July 1st under Senate Bill 680.

Florida Bright Futures Scholarship is awarded to Florida residents based on merit. However, FAFSA is a federal source of need based funding.

Over 38 million students borrow nationwide, amounting to $1.1 trillion in unpaid debt, according to Boston Globe. Many are fighting to make the process of getting aid easier to increase college enrollment.

FAFSA and Bright Futures, Past and Present.

FAFSA was required to receive Florida Bright Futures Scholarships for just one school year, 2011-2012. FAFSA or Free Application for Student Aid is a form using tax information to provide need-based financial aid. FAFSA is required to be renewed every year.

The requirement in FAFSA for the 2011-2012 year translated to 30,000 extra forms to be reviewed than the previous year in Florida, according to NPR StateImpact.The removal of this requirement comes back to excessive paperwork.

About one out of every three FAFSAs are randomly selected for authentication by the Department of Education, said the Florida Board of Governors.  This means hours of extra paperwork for students like Fields.

The FAFSA has seen other changes too.

The 2014-2015 FAFSA application will provide options to reflect on non-traditional households, according to the Alligator. FAFSA will recognize same-sex parents by using the terminology “Parent 1 (father/mother/step parent) and “Parent 2 ( father/mother/step parent).” Students will also be able to claim their guardians to be “unmarried and and both parents living together.”

But the barriers of FAFSA go beyond student’s parental status.

Why make it a requirement in the first place? Some may ask why require a document used to determine aid based on need for an award distributed based on merit?

The idea behind requiring FAFSA was not an effort to change the Florida Bright Future program from merit-based to need-based, Evelyn Lynn, Florida Senator, said.

Lynn said the primary purpose was to collect data. This came as a result of the criticism that Bright Futures only provided to wealthy families. There was, however, no way to prove or disprove this before the requirement of FAFSA.

There’s no evidence yet to suggest the year’s data was able to prove or disprove the criticism.

FAFSA works to provide student’s financial aid but the application may become frustrating enough to the point where students give up.

There were about 50 UNF students who were awarded Florida Bright Futures Scholarships for the 2011-2012 year but could not claim their money because their FAFSA never came through, said Anissa Agne, Director of Financial Aid.

Not just a Florida Problem.

The Obama administration recognizes the barrier FAFSA can create. One and a half million students may qualify for PELL grants but have not applied, according to the estimates of the Education Department. PELL is a grant offered by the Department of Education to fund college education. Filing a FAFSA is required to qualify for PELL.

This can only be done if college students are willing to put in the time to claim these forms of financial aid.

The number of FAFSA questions on the 2010-2011 application was reduced by 20 percent. The number of webpages needed to complete the application has been halved, Arne Duncan, Education Secretary, said.

Ironically enough, 2013 spring enrollment decreased 2.3 percent from the previous year, according to the National Student Clearinghouse.

How bright are the futures of Florida students?

In 2009-2010, the Florida Department of Education paid out $400 million in Bright Future Scholarships, according to the Tampa Bay Times.

This does not appear to be enough financial aid for students.

The average student will find themselves bearing $25,550 in student loans, according to NBC News.

The job market also remains an issue. About half of college graduates are not able to get full-time jobs, CBS News said. And in the occasion a graduate is fortunate enough to find a job, this may not  lift the burden of student loans. 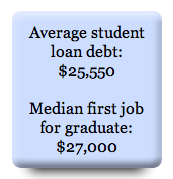 The median salary for recession-era graduates is $27,000 for their first job, according to CBS News. Not much more than the debt they incurred to become a graduate. And contrary to other types of loans, student loans can not be cleared by filing for bankruptcy.

Regardless of the amount of paperwork involved or changes in requirements, Agne still recommends filing a FAFSA.

There were students who found out they qualified for additional grants, something they would not have discovered without filing a FAFSA, Agne said.

Let’s face it, right now students need all the financial help they can get, FAFSA or otherwise.