Last year, in his first year as head coach, Steve Loeswick led the UNF volleyball team to program bests in the A-Sun. UNF captured back-to-back sand volleyball titles and made it to the finals of the indoor A-Sun championship. This season he will have the chance to repeat success with a team full of new faces — though it may be more difficult.

Loeswick led the Ospreys to 10 wins at home, the highest for the program since 2006, and was just one game away from winning the program’s first A-Sun championship. UNF fell to East Tennessee State in the fifth set of the Conference final.

This season the team will struggle to repeat the success of last season due to some inexperience.

This season UNF will only have six players returning from last years squad of 14. Two of the six players were starters last year and the other four shared limited roles. The 2013 roster features six freshmen and two transfer students.

Although the freshman haven’t had the experience of Division I volleyball yet, they are entering the preseason with an attitude that is impressing the returners.

“[The newcomers] are very responsive, very excited and they all want to make this team great and start off where we ended last year,” senior Anna Budinska said.

As one of the starters returning from last year and one of only two seniors on the roster, Budinska will be need to be a leader for the squad as it continues the transition from old coach Kevin Campbell’s to Loeswick’s players.

“It’s going to be a different role this year, but I’m excited,” Budinska said. “I have to be more vocal, more leading by example.”

One of the things Budinska and the rest of the team will be working on is replacing the bulk of kills from last years team.

Eighty-two percent of the team’s kills last season came from players who are no longer Ospreys, including Marija Pantovic (249), Dagnija Medina (313) and Paige Pridgeon (446). Out of the returning players, Budinska (227) had the most kills per set at 2.32.

One player who will look to fill in some of the missing 82 percent is Junior transfer Saelina Dunn. Dunn joins the Ospreys after one year at Cal State Bakersfield and one year at Golden West College. At GWC she finished the year with 2.84 kills per set.

“I’m excited about this program and the coaches are really good,” Dunn said when asked what brought her to UNF. “I got a really good vibe from them. I talked to a few of the girls and I liked the chemistry.” 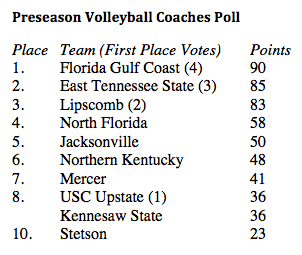 Dunn has already set a personal goal for herself as she enters another year at another school.

“Individually I just want to bring positivity to the team and make my teammates proud,” Dunn said.

Another hole that will need to be filled is defense at the net. The top four blockers from last year’s team have all moved on. Freshman Carina Hoff will be looked to as one of the newcomers to replace those missing blocks.

At 6-foot-2 Hoff is the tallest incoming freshman and the first volleyball player out of Eustis High School to play for a Division I team. Hoff looks forward to the future she will have at UNF and the opportunity to grow with a core group of athletes.

“I think us [the freshman] starting off together will help us really grow together over four years,” Hoff said.

With so many new faces and different playing styles the first week of practice for the team focused on conditioning and getting to know each player. Loeswick said he was happy with the shape his returning players came into camp and how the new players were reacting to a more intense practice.

Despite last year’s success Loeswick and his team still have the same mindset entering each day of practice.

“We don’t really think about the championship yet, our focus is always one game at a time,” Budinska said. “We really try not to look at the big picture our mindset is one game, one point.”

UNF begins the season at the Holiday Inn Select UCF Invitational August 30-31 where it will face Alabama State, UCF, Arkansas-Pine Bluff and Valparaiso. The first home game will be played against Florida Atlantic University Sept. 9.