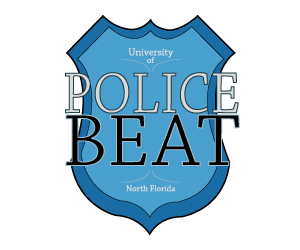 A student entered the Hodges Stadium Track without permission, and ran several laps before his legs became nonfunctional. At that point in time, he contacted Emergency Services for help, who then turn notified UPD. JFRD responded to the location with Engine 59 and Rescue 50. The student was transported to the Mayo Clinic. The Officer on scene suggested that he be referred to Student Conduct, for entering the Stadium without permission.

A cordless drill and its accessory kit (together valued at $300) were stolen from a lab in the Fine Arts Center. The drill was used by students in ceramic classes. Several classes took place over the period that the drill went missing. The room the drill was stolen from is typically locked. The Professor who reported the incident stated that he had not had any other missing items or issues with students. It was hoped that the equipment, though not available for checkout, was being used by one of the advanced level students. There are no suspects or possible investigative leads.

A student parked his car in Lot 15, and returned to it two days later to find it had been vandalized. The Ford decal on the hood had a visible scratch across its center, and the driver side had damage, and scratches drawn in three circles. There are no suspects or possible investigative leads.

Two UPD officers responded to an Osprey Landing room, after a silent witness reported smelling marijuana. Two students were in the room, and gave the Officers permission to enter. After being asked if there was any marijuana in the room, one of the students gave the officers a glass water pipe used for smoking hash oil. The officers were given permission to search the room, and found a metal pick for cleaning the pipe, as well as multiple containers with marijuana residue. The student who claimed possession of the pipe was referred to Student Conduct.

A student’s dorm key and car key were stolen from his dorm. The student left the keys in his dorm keyhole, and left the scene for a few minutes. When he returned, the set of keys was gone. Searches of his room did not reveal the keys. There are no suspects or possible investigative leads.