Threats against UNF deemed not credible 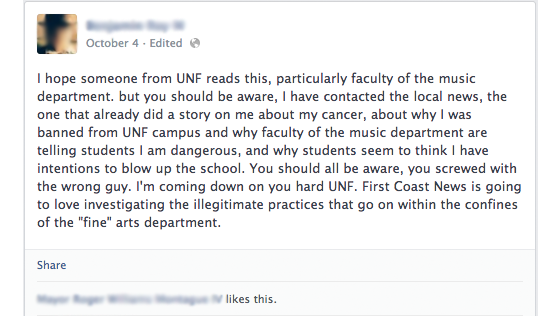 On Oct. 5, UPD received a report that a former UNF student posted a disturbing message on Facebook.

Part of the suspect’s post said, “You should all be aware, you screwed with the wrong guy. I’m coming down on you hard UNF.”

Ellis Wade called the office on behalf of his girlfriend who currently attends UNF. He said he knew the suspect back in high school but the two were merely acquaintances.

Charles Strudel, UPD’s Chief of Police, said the case is non-threatening. He said officers have interviewed the suspect, along with some of the Music department faculty staff.

Strudel said he did not read the Facebook post but he believes that it was a message of frustration with the system. Strudel said the suspect is upset and unsatisfied with the UNF’s Fine Arts department and possibly with UPD.

Based on previous interviews with the suspect, Strudel concluded that he is non-threatening.

Tom VanSchoor, Dean of Students*, reviewed the incident and classified the case as a non-credible threat because the suspect’s post did not direct any plan of action.

VanSchoor is also chairman of UNF’s SOS program, a support system comprised of professional staff and faculty that responds to situations where a student’s behavior causes concern to other students.

These behaviors can include on-going disruption of living or classroom setting, behavior that is unusual or alarming in nature and hyper-emotionality such as angry outbursts.