Many students believe depression can be defined simply as “sadness and feeling lonely.” Students say, “Everyone goes through troubling times. Some people don’t have the resources to get out of it.” However, both these statements are incorrect and dangerous when dealing with depression. These inaccurate generalizations make depression something commonplace that affects everyone, when in fact, some people don’t pass the test when faced with it.

According to the National Institute of Mental Health (NIMH), depression is a “common but serious illness” whose symptoms “interfere with your ability to work, sleep, study, eat, and enjoy life.” People who are depressed may have difficulty getting out of bed in the morning, exhibit antisocial qualities, lose their appetite and interest in activities they previously enjoyed, feel fatigued yet restless, and feel like nothing is going to get better. Depression can lead to suicidal thoughts and motives.

At UNF, between May 1, 2013 and April 30, 2014, 52% of the 1,242 students who were serviced by the Counseling Center exhibited symptoms of depression — about 650 students last year, according to Deborah Baker, the Clinical Director of the Counseling Center. These students account for 4.0% of UNF’s students last year. NIMH says that 6.7% of adults experience symptoms of depression on an annual basis — which is more than the 4.0% of UNF students. Baker said, “I estimate that for every student who comes in seeking help through the Counseling Center, there is another student on campus who is having similar issues but does not seek assistance.” 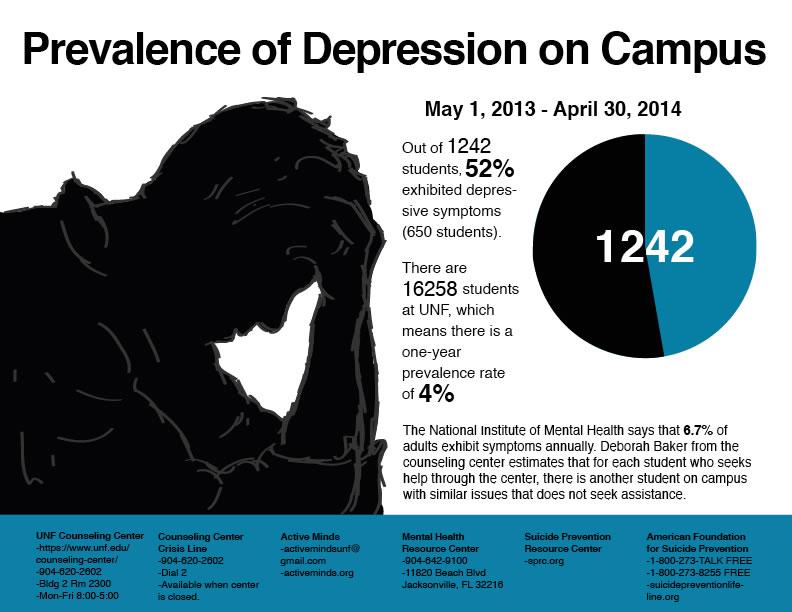 Depression is a serious mental illness, but the stigmas and misconceptions surrounding it prevent people — UNF students included — from recognizing the symptoms and seeking help. There’s a common notion that depression is an emotion, something that you feel one day and not the next. “Some people think that people who are depressed should just snap out of it,” said Baker. “If they could, they would.” Depression is a mental illness. It’s not an option but a disorder.

Natalie Indelicato, PhD, LMHC, visiting assistant professor in the Clinical Mental Health Counseling Program, agrees. “There’s a myth that depressed people are just lazy, and should stop feeling sorry for themselves. But it’s not just a matter of getting out of bed.”

Indelicato says that one of the biggest stigmas is that if you have symptoms of depression, it means that you’re crazy or weak. In actuality, the causes of depression have nothing to do with someone’s strength. It can be prompted by someone’s heredity, chemical changes (which are common among college-aged people) and environmental changes (like leaving home and living on campus).

According to Indelicato, a lot of people don’t think that depression affects college students. “There’s so much pressure to have fun and be happy. ‘They’re the best years of your life.’ People have the assumption that in youth, life is stress-free.” As students, we know that this could not be farther from the truth. College students today are under more pressure than previous generations to perform well and balance a multitude of responsibilities.

“Depression doesn’t discriminate,” Indelicato said. “Most first episodes happen for people when they go to college, during the big life changes that come with it.”

Despite the likelihood of college students experiencing depression, between the pressures of college and the environmental and chemical changes in their life, there’s a stigma that “talking about depression only makes it worse,” said Indelicato. People believe that ignoring symptoms of depression will make them go away, when in actuality, untreated depression is a big risk factor leading into suicidal thoughts.

“Depending on the research, suicide is the second or third leading cause of death among college students,” said Indelicato. Treatment for depression is a combination of talk therapy and medication, which is very effective. There’s another stigma that being on medication for your mental health is a bad thing — but would anyone be ashamed of taking antibiotics when you’re sick? Of course not.

So why are there so many stigmas and misconceptions surrounding depression, when it’s a very common issue for college-aged students, and there are resources and treatments available? Indelicato said, “I think that our society tends to marginalize people who are different and misunderstood.” She said that it hasn’t been demystified because for a long time people were not willing to discuss it.

Additionally, Indelicato said, “Often [in media] there are wrong associations between mental illness, violence, and instability. Then the public makes the same associations.”

Baker said, “Stigmas exist everywhere there are people who are uninformed about depression as a medical illness with strong and effective treatments that are available.”

Based on the excessive misconceptions that surround depression, especially in people our ages, it’s highly important to educate yourself about what you can do if yourself or someone around you exhibits symptoms.

Here at UNF, you can contact the Counseling Center for screening appointments, individual and group counseling, and medication management services — all for free to students. They offer referral information to community providers if they don’t have services to fit your needs. They have a 24-hour crisis counseling via phone, at 904-620-2602.

UNF also has its very own chapter of Active Minds, which is a student-led organization that strives to reduce the stigma surrounding mental illness. Additionally, UNF trains staff members (including Resident Assistants and those in student affairs offices) to recognize and assist students who are experiencing difficulties. And off-campus, students can contact the Mental Health Resource Center, located on Beach Blvd. at 904-642-9100.

The idea that depression is something to ignore and keep quiet about is contributing to the deaths of college students across the country. It’s an issue that we need to overcome with education and minds not clouded by stereotypes and stigmas. These will never be “the best years of our lives” if we ignore an issue that is affecting the mental health of so many of us.