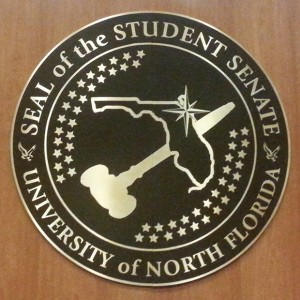 An hour before the meeting, two appointees spoke in front of the Government Oversight committee about their qualifications for their positions.

Solar, seeking judicial appointment as an Associate Justice, had an internship with Marco Rubio’s campaign office and is the treasurer of Phi Alpha Delta, UNF’s pre-law fraternity. He said both of these have prepared him for this position.

Student Body President Joseph Turner said Solar was given some hypothetical situations to interpret and he explained them very well.

Rains, seeking appointment to the Elections Commissioner seat, said when he was an incoming freshman, he knew nothing about student government or even when elections were. He said if he gets the position, he’ll try new approaches to reaching incoming students and advertising the elections to make them more competitive and have more student involvement.

Government Oversight Chairwoman Kate Savage said the position will need to be unbiased. Even though Rains is involved with many organizations on-campus, Savage said, he’ll use his experience to bring a competitive election this fall.

JR-14SA-2773: Construction of Inbound Shuttle Stop at the Osprey Crossings

This bill approves the idea of constructing an inbound shuttle stop at Osprey Crossings.

Savage, who sponsored the bill, said she’s lived in the Crossings and riding the shuttle from the Crossings to Hicks Hall, then back to campus to the stop by the Osprey Cafe can take 15 minutes.

This bill proposes building a stop between the R and S buildings at the Crossings. She said there is a budget set aside for constructing this stop, but no set cost yet.

Student Body President Joseph Turner said, if the stop is constructed it’s predicted the shuttle routes will take an additional three minutes to cycle. And wait times per bus stop will be about 45 seconds longer.

No other information on the construction is available, but the resolution has been forwarded to the Board of Trustees, VP of Development & Alumni Affairs, and VP for Student and International Affairs.

In his executive report, Turner said he’ll create a Veteran’s Council of five members this Fall.

He said UNF has the second-highest percentage of veterans in the state university system, so there should be a council to discuss their needs.

Turner also said there will be more Jaguars season tickets available this fall. Students can purchase more than two game tickets at a time now.