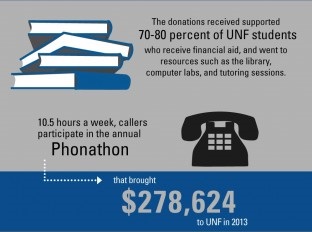 The phone rings once–twice–thr–“Hello?” The alumnus picks up, triggering a well-rehearsed spiel asking for donations:
Hi, my name is Cassidy. I’m a freshman calling on behalf of the College of Arts and Sciences at UNF. I’m excited to tell you about some really cool things that have been happening here. Have you heard that U.S. News and World Report named UNF a best regional college for the second year in a row? It’s something we’re very proud of this year. I’m also calling because we love to get the scoop on our alumni, and I like to hear how our alumni got their start. So what was your first job after you graduated?
And so it goes, night after night throughout the year. From 5:30-9:00 p.m. Monday through Thursday and 1:30-9:00 p.m. on Sunday, students funnel into Alumni Hall. The student callers sit down along one wall in a small room, settle in front of a row of netbooks, and begin calling alumni.

Putting their headphones on and staring at their computer screens, they are stuck between not wanting anyone to answer and dying for someone to pick up.

I worked there for a semester, so I know how little of the three-page script someone can get through before the alumnus ends the call. If the conversation does last beyond the first question, alumni won’t be happy once the caller starts asking for money.

Not that student callers are ever anything other than polite, or they don’t have valid reasons that alumni should donate. Donations make the university a better candidate for grants, support the 70-80 percent of UNF students who receive financial aid in any given semester, and go to resources such as the library, computer labs, and tutoring sessions.

It’s the student caller’s job to know these facts, and to politely and calmly inform objecting alumni. For 10.5 hours a week, callers participated in the annual phonathon that brought $278,624 to the university in 2013.

They work hard. There has been a UNF Annual Giving phonathon since spring of 2010, and each year the callers bring in more and more money according to Tamir Phalen, the call center supervisor since the fall of 2010. The goal this past year was $277,000, and the callers at the center exceeded that goal by over $1,500.

It’s definitely not easy to do. Of the 410,000 attempted calls made in 2013, the students spoke with 18,046 and received pledges from 3,952 of those. In other words, of the people who picked up, 22% donated to the university. That means that less than 1% of the total people contacted donated.

The average student caller will talk to eight to twelve people a night and is expected to get four donations. (Don’t worry– students aren’t fired if they don’t meet that expectation. It’s not a telemarketing company.)

Ultimately, alumni’s decisions to donate depend on individual situations and the student callers’ persuasive skills. Phalen explained how she has definitely noticed giving trends in her years working at the center.

The most common reason people say “no” is for financial reasons, Phalen said. Alumni say they have student loans to pay off, or may not have gotten the job they expected after graduating.

“I think a lot of those people don’t realize that even the smaller donations do have a huge impact on the school,” Phalen said. Almost everyone can give something. Although the average gift received last year was $70.50, any amount counts.

Those who donate do so in part because of the students they’re speaking with. “Once an alum speaks to a student who works for the call center,” Phalen said, “that’s when they realize how big of an impact giving back to the university is.”

Phalen said donations come from people who feel the university served them well during their retention, and from those who realize the impact of giving as a tradition– understanding that since UNF’s first graduating class people have given back to the university, and that’s what has facilitated education.

“A lot of it has to do with pride,” Phalen said.

Pride may be the one thing UNF is lacking. But Phalen said you have to consider the age of the school when comparing universities.

“UNF is fairly young, in that it was established in the early ’70s,” she said. “And because of that, the alumni base is a lot younger than most people. So we don’t have a legacy.”

Phalen also explained how we have a lot of nontraditional and commuter students, and no football team, all of which make a difference when comparing the donation success of other schools. Unlike other younger universities, Phalen said UNF does well in comparison.

When I began writing this story, I had an idea in my head that our alumni weren’t donating because there’s no pride in the university. Now I can see that’s not necessarily true. Although working at the call center was hard — calling people who don’t necessarily want to talk to you is not my idea of fun — it isn’t in any way unsuccessful. People often compare UNF to bigger and much older schools like UF and FSU —schools with football teams to root for. Unfortunately, those comparisons offer a warped perspective.

Instead of considering UNF a good school for catering to both traditional and nontraditional students, we criticize it for not measuring up to bigger schools it can’t even begin to compete with.

It’s all about perspective, and the student callers who get four pledges a night are left with a pretty positive one when they leave their work station for the night.