Encounters with the supernatural at UNF

***DISCLAIMER: THE FOLLOWING ACCOUNTS HAVE BEEN WELL DOCUMENTED AND EXPERIENCED BY CREDIBLE INDIVIDUALS. THE IDENTITIES OF THESE INDIVIDUALS ARE CONCEALED FOR THEIR OWN SAFETY. VIEWER DISCRETION IS ADVISED*** 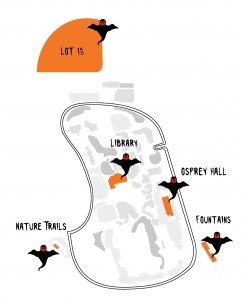 There are tales taller than Jack’s beanstalk going around the UNF campus–tales that make it harder and harder to walk alone at night. There are rumors that are too unspeakable to mention in anything louder than whispers, and ghost stories that make every dark corner feel like an infinite pit of darkness.

For some reason, that darkness is fixated on UNF students. If you are not strong enough, it just might win. It has before.

If this is the first you’re hearing of these UNF hauntings, it would be wise to take them to heart. They may very well prevent you from becoming part of the legends that are only told in whispers, and keep you from being dragged into the darkness that feasts, mercilessly, upon us all.

A Demonic Entity in the Fountains Dormitory 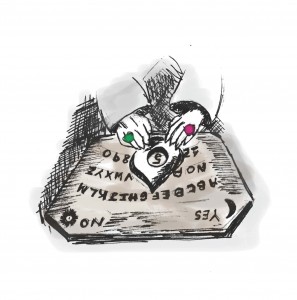 The first haunting is one of the most disturbing. A UNF freshman, who is currently living in the Osprey Fountains dormitory, has brought something dreadful with her back from the other side.

This young lady was experimenting with a Ouija board years ago in her hometown. It was supposed to be fun, something to pass the time and get a few cheap laughs in the middle of a boring slumber party. She got more than laughs, however; she got a new friend to play with.

When she and her friends first made contact with what they believed to be a kind, human spirit that had passed away years ago, they were all eager to ask the presence questions about the afterlife.

It was soon obvious to everyone in attendance that this was not a human spirit, but something far more malicious.

Eventually, the UNF freshman asked, “Are you good?”

The cursor moved slowly to “N” and then to “O.”

She and her friends jumped back and, according to the UNF freshman, did not close the board properly to ensure the negative entity did not feel welcomed into our world. This entity, she fears, is with her even to this very day.

The UNF freshman describes many of her nights as feeling as if she’s not alone. And guess what? That means that no one in the Fountains is alone–not anymore. Sleep tight. 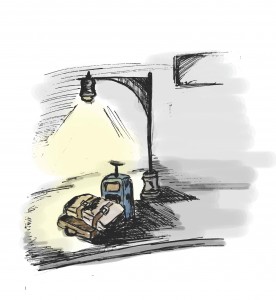 Long before UNF was the bustling metropolis it is today, it was mostly reserved for graduate students. During that time, there were very few opportunities for any student to live on campus. One of the first dormitories, Osprey Hall, was constructed in 1989 and offered a lakeside opportunity for on-campus living.

During the dorm’s inaugural year, a UNF sophomore made plans to be picked up by his father for Christmas break. After dragging all of his bags to the curb, he sat down and waited. He continued to wait until the sun had set and the crisp autumn air nipped at his nose, forcing his body into a shiver.

Before going to bed, the boy’s roommate looked out the window and noticed that he had not been picked up yet. Upon this sight, his roommate went out to ask him why his father was late to pick him up.

According to legend, the boy answered, “…Because my dad is dead.”

The boy’s roommate, concerned, went to comfort him. The boy pushed him away and, supposedly, went for a walk around campus to clear his head.

UNFPD conducted a search, but was never able to find the UNF sophomore.

It is said that if any UNF student staying in Osprey Hall sits outside the dorms on a cold night and mutters the words “Dad’s not coming” three times, then the spirit of the UNF sophomore will appear to wait for his father on the curb with you. You must then wait with him until the sun rises, without speaking, until he decides to go on the same walk from which he never returned.

Lot 18: the Sad Spirit in the Drain 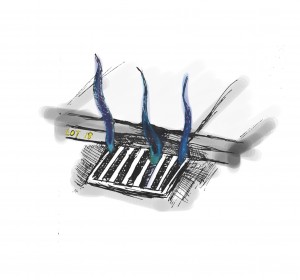 Many UNF students park in Lot 18 on a daily basis and have never once thought to describe this parking lot as anything less than normal.

How wrong they are.

Multiple reports over the past several months confirm that a man’s voice can be heard, screaming, in the early hours of the morning. These mysterious screams are apparently emerging from somewhere in the middle of Lot 18.

According to this UNF junior, it was too dark to see down into the drain, and the sobbing stopped after he attempted to call out to the voice.

If you hear a man’s voice calling out late at night from UNF’s largest parking lot, know that there is nothing you can do. He is trapped in Lot 18, and we don’t know what he did to deserve it.

Leave him, or risk joining him.

The 5th Floor of the Library 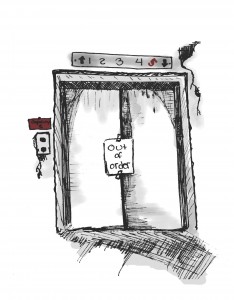 There is an elevator that we all pass on a regular basis in our beloved library. It rests, nestled, near the back of the first floor. No one goes on it and no one has ever seen anyone go on it. But one rumor has many students a buzz about this peculiar little elevator, and that rumor is the elevator’s final stop: the secret 5th floor.

According to urban legend, the 5th floor can only be reached using this mysterious elevator that is off-limits to students. Supposedly, the architect designed the UNF Library so that the stairs would never accidentally lead any wandering student to the secret floor.

As far as anyone knows, this elevator is the only way to get to the floor that was never meant to be seen.

What lies there? No one knows for sure.

The only lead that has been uncovered has been three to five separate complaints from students studying on the 4th floor.

Strangely, all of their complaints have been exactly the same.

“We keep hearing screams coming from above our heads.”

UNF students can only sit in speculation as something strange lies just above them.

The secret floor exists for a reason, and the fact that there was so much effort to ensure its secrecy is incredibly disturbing.

If you hear the screams, say something. If you don’t, don’t expect anyone to help you when it’s your muffled screams coming from a place no one knows exists. You will not be found.

The Apparitions of the Nature Trails 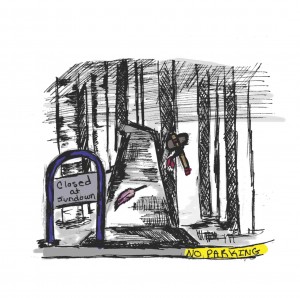 Our Nature Trails are open from sunrise to sunset. The reason they aren’t open to us past sunset is more than scary.

Hundreds of years ago, the Timucua Native American tribe roamed the Jacksonville area. During the 1600s, their population decreased to almost nothing due to the spread of disease brought by the Spanish and other explorers.

It is believed by many that the spirits of the Timucua tribe haunt the UNF Nature Trails. Their spirits are supposedly angry that the explorers brought disease to their land and destroyed their culture.

Because of their suffering in life, the Timucua spirits wander angrily throughout our campus trails. They are out there, right now, eager to seek revenge on those who continue to inhabit their land.

Never go on a walk on our trails after sunset. They are waiting, patiently, forever.