Whispy smoke strings rose above the crowd, illuminated under the dim yellow bulbs. Twenty-somethings hovered at the bar and lounged in the pleather booths, chatting over tunes and sauce. In the back a few friends bopped along to the DJ’s pulsing beats.

It’s 9 p.m. on a Monday and the 5 Points bar nears its maximum capacity.

The bar is Lomax Lodge, and it opened at 5 p.m. Feb. 15 — just five weeks after Steamworks, the previous establishment, closed its doors.

Ian Ranne is the new owner. It was a big day for him, not only was it the opening of his second night life locale (he also owns Shantytown in Springfield) it was also his 30th birthday.

The previous 5-points watering-hole was open less than two years — July 2008 – Jan. 2010 — so hopefully Ranne has better luck. His track record is in his favor; Shantytown has been dishing booze and beats steadily since 2006.

“Were trying to take the same charisma we have at Shantytown and bring it here, basically,” Ranne said. “We’re gonna do almost exactly the same thing, just in a different neighborhood.”

There will be one fundamental difference though.

In addition to more music Lomax Lodgers can enjoy a game of pool or air hockey, gaze upon a monstrous DJ dragon and eenie meenie miney mo over 100+ various brands of bottled beers and 12 on tap. 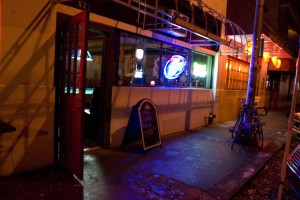