The show’s not over: Lady Ospreys get the ‘W’ 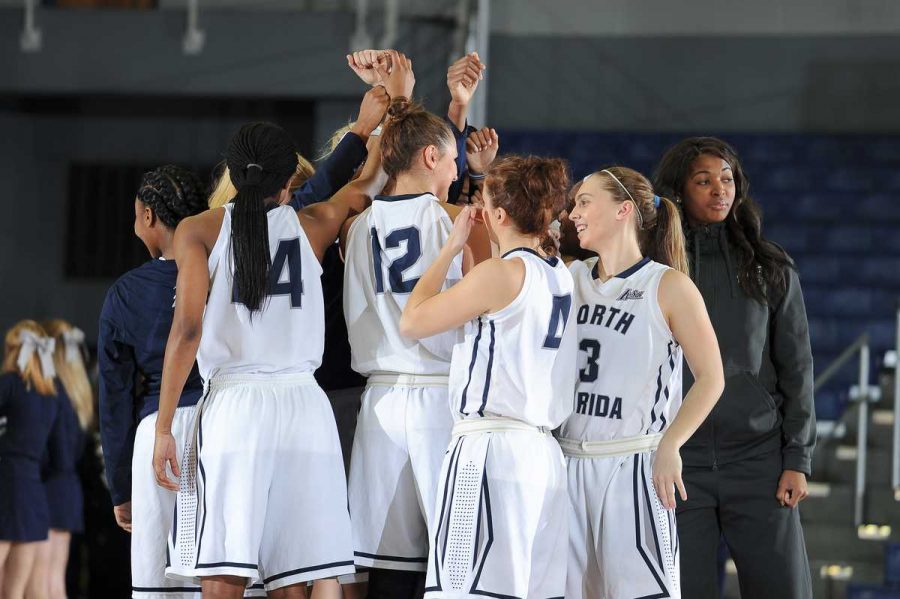 The lady Ospreys lost to USC Upstate in the A-Sun quarterfinals. Photo courtesy of UNF Photos

A second half output against the Lipscomb University Bisons on Thursday night, Feb. 19, helped the lady Ospreys snap a six-game losing streak. The Ospreys defeated the Bisons 57-54 in Nashville, Tenn. at the Allen Arena.

“I’m just really proud of our effort and the fight these girls had,” UNF’s Head Coach Mary Tappmeyer said. “Our goal was to keep Lipscomb in the 50’s because they are such a dynamic offensive team. We focused on defense all week and that really showed in tonight’s game.”

The Ospreys (11-15, 2-9) went into halftime trailing by four points. When they returned to the floor, the defense stepped up and held the Bisons (8-17, 3-8) to just 18 additional points in the final 20 minutes. Whether it was the recent loss of one of their star players, sophomore guard Bailey Florin, to a knee injury last week or just a turning of the tide, the Ospreys showed great athleticism in this victory.

Two Osprey seniors shone especially bright in last night’s game. UNF’s Destinee Smith, senior guard, led the way for the Ospreys by gathering 20 points in her 40 minutes of play, while Paulina Zaveckaite, senior, pulled in a double-double with 14 rebounds and 13 points.

The Lipscomb squad had a hot night as well with one of their mainstays accruing a double-double.

Sara Bliss, Lipscomb’s only senior on the team, had a career-night with 22 points. She went 9-13 in field goals including 4-6 from beyond the arc. The Bisons’ Danay Fothergill tallied 10 points and 10 rebounds, while Emily Eubank reciprocated with six assists.

According to Lipscomb’s Head Coach Greg Brown, the Ospreys managed to overtake his team’s tempo and gain control of the game in the second half. A bevy of missed field goals and free throws sealed the deal for the Bisons and allowed the Ospreys to take home their first victory in nearly a month.

The lady Ospreys return to action on Saturday night, Feb. 21, in Highland Heights, Ky. They will face off against the Northern Kentucky University Norse at 7 p.m.

For more information or if you see an error in this story or have any compliments/concerns, contact Jordan Ferrell [email protected].