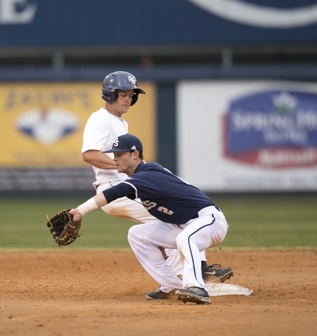 Blake Voyles, UNF’s redshirt freshman catcher, saved the game for the Ospreys (5-4) in the ninth inning against Georgia Southern (5-4) at Harmon Stadium on Wednesday night, Feb. 25. With two outs looming overhead, Voyles’ shot to left field sent Nick Karmeris and Corbin Olmstead to home plate, ending the game in favor of the Ospreys, 5-4.

Georgia Southern’s Matt Geiger took the mound at the top of the first, while Matt Vaka got the start for the Ospreys in the bottom. Both teams came away with a single run in the first, going into the second tied at 1-1.

The scoreboard would remain unchanged until the top of the sixth when Georgia Southern’s Chase Griffin, catcher, blasted one to right-center field, driving the designated hitter Spencer Duffie home from first base. Griffin would then be sent home from third base after pinch hitter Will Hudgins grounded out to Osprey shortstop Patrick Ervin. The Ospreys answered back in the bottom of the sixth when UNF’s catcher Keith Skinner singled up the middle and drove fellow teammate Donnie Dewees, centerfield, to home from second base, bringing the score to 3-2 going into the top of the seventh.

The Eagles would end up capitalizing in the seventh off of an Osprey pitching error committed by John Suskauer. Georgia Southern’s centerfielder Logan Baldwin got on base by singling through the gap to right field. After a wild pickoff attempt by Suskauer, Baldwin dug in and rounded the bases before the Ospreys could peg him. The bullpen was called upon shortly thereafter and senior right-hander Dan VanSickle relieved the left-handed redshirt freshman, Suskauer. North Florida was unable to answer back in the bottom of the seventh leaving the score at 4-2 in favor of the Eagles.

Both Georgia Southern and North Florida would cruise through the eighth inning hitless.

UNF’s Jamie Cardwell came in to close for the Ospreys at the top of the ninth, retiring VanSickle after 22 pitches and three strikeouts. The Eagles struggled to find any success with Cardwell on the mound. Georgia Southern went three up and three down.

Georgia Southern’s closer Chris Brown came out in the bottom of the ninth in an attempt to put away the Ospreys, who were trailing by two runs. UNF’s Trent Higginbothem, senior, connected on a 1-1 pitch and drove the ball down the right field line.  Higginbothem advanced to third base on a throwing error by the Eagles. With one out, UNF’s Ryan Roberson, redshirt senior, flied out to left field. Higginbothem tagged up on the fly ball and then sprinted home to bring the Ospreys within one of tying. After two walked batters and a cleanup-shot from Voyles, redshirt freshman, the Ospreys would reel in their fifth win of season.

Next up for the Ospreys will be a neutral ground showdown against St. John’s University (3-3) on Friday, Feb. 27 at noon in Charleston, S.C. North Florida will be looking for its third consecutive win.

For more information, news tips, or if you see an error in this story contact [email protected].