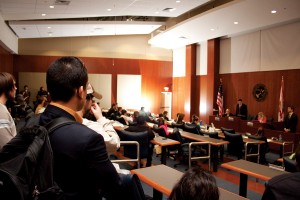 The regular senate meeting seemed to be moving along swimmingly as the senate sent its proposed budget back to the Budget and Allocations Committee and approved funding requests from several student groups without a hitch.

Dozens of students lined the back wall of the chambers in anticipation of the presentation of the budget, but with the anticlimactic denouement of the senate throwing it back to committee, most walked out as all indications pointed to a rather tranquil evening in SG Senate.

Then the Society of Physics Students came up for a travel funding request.

Blackburn called the event prestigious and the “United Nations of physics conferences” because students from around the world will be in attendance.

But before Blackburn and Jaap could even make their pitch, questions arose as to whether the senate could hear the request because the original forms were “literally thrown out.” That is, said B&A Committee Chair Kyle Nelson, the paperwork had inadvertently been thrown in the trash.

When the request came up initially, one of the individuals listed was not a UNF student. Therefore, the senate could not appropriate funding for the trip, Nelson said.

Once the physics society cleared up that problem a few weeks later and resubmitted the paperwork, it was discovered that the original documents were missing, Nelson said.

During debate of the provision, SG Senate President Mack Volk stepped down from his position as senate chair to join the discussion and voiced staunch opposition to the bill. Since becoming senate president in the fall of 2009 Volk had never elected to take this action.

“I believe that funding this fully is extremely irresponsible,” Volk said.

Volk said his main concern was the high cost of the plane tickets per student.

As debate continued, some in the chamber proposed denying the request entirely due to the cost of the tickets.

“It’s unfair to them for us to zero-fund this thing for an error that ultimately lies on SG’s plate,” Nelson said. “This is absolutely absurd.”

Sen. Carlo Fassi sponsored the bill and seemed to concur with Nelson.

Fassi said zero-funding the measure would represent “a black mark on Student Government as a whole.”

After amending the bill to cut funding for two tickets, the senate rejected a motion “to pass as amended,” essentially zero-funding the provision.

After the meeting adjourned Volk said it wasn’t the physics society or the conference but the cost of the tickets per person that compelled him to step down from his chair and oppose the bill.

He also said he thought fault rests with both SG and the physics society for the paperwork kerfuffle.

“I don’t think that one party is to blame, I think it’s kind of on both ends,” Volk said.

Students should not be expected to know the ins and outs the requests process, which is found in Title VIII of the SG Constitution.

“It’s not the responsibility for every single student at this university to know the ins and outs of Title VIII, it’s ridiculous,” Volk said.

But with that said, the physics society put their request together at the last minute.

“I don’t expect everyone to know that,” he said. “But if you really want to get funding for something you’re going to ask the necessary questions.”