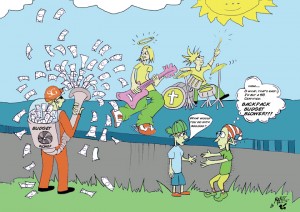 Perhaps no phrase enjoys greater rhetorical employment in the halls of Student Government than “fiscal responsibility.”

It is a phrase used with such frequency and zeal that one would seem safe in assuming SG’s strict adherence to this principle without a second thought.

However, recent actions appear to cast this assumption into doubt, and with it, the presupposition that the term is properly understood.

It’s one thing to say you are fiscally responsible, but actually conducting business in such a manner sometimes requires sacrifice and austerity. In times of economic peril, such as these, it is not fiscally responsible to spend an inordinate amount of money on an event that caters to a distinct population of the student body.

Yet, sacrifice and fiscal clarity was conspicuously lacking in SG’s decision to allocate student funds for Compassion 2010, a religious-centric event that brought Christian musicians, speakers and other charity groups to campus Feb. 20.

On the heels of unveiling a proposed budget wrought with large cuts for a multitude of campus organizations, SG proudly doled out more than $50,000 to put on a show that transparently advances the interests of an exclusive group — one that relegates you to eternal damnation if you disagree with them.

Before we’re accused of the religious short-sightedness we feel our well-intended but misguided friends in SG have foisted on the student body, allow us to set the record straight: Our qualms are not with Christianity, but its preferential pecuniary treatment when fiscal restraint is touted as an an existential — if not moral — imperative.

If SG has around $50,000 to spend on a one-night religious concert for the benefit of around 1,000 attendees (the estimated Compassion turnout), it stands to reason that there is ample funding available for the campus organizations targeted for cuts, right?

We’re having a difficult time taking SG seriously about the need to tighten our budgetary belts when they flog fiscal responsibility one moment and approve such exorbitant and unnecessary spending the next.

Compounding our confusion is the incongruent statements some student representatives have made with regard to SG spending.

At the Feb. 12 budget hearings, Sen. Kyle Nelson, the Budget and Allocations Committee Chair, criticized the African American Student Union for failing to generate sufficient turnout at their comedy show to justify SG’s funding of the event.

But when recently presented with analogously abysmal spending-to-turnout numbers for Compassion, Nelson didn’t hesitate to defend the appropriation and endorse its continuation in the years to come.

At the Feb. 17 budget open forum, Nelson rationalized the B&A Committee’s decision to propose cuts to the International Center’s annual banquet based on the concern that “anyone off the street” could potentially attend.

“They [the B&A Committee and SG Treasurer Matt Samra] felt that funding something with Student Government, with student money, for someone who is not a student to eat and enjoy was not fiscally responsible,” Nelson said.

Yet, Compassion seems to suffer from this same conundrum.

The attendance for Compassion was estimated at around 1,000. But there’s really no way to know exactly how many or exactly who attended because the concert did not require a ticket or proof of student status for admission. Although a student ID was required to partake in the food provided, the show asked for no such thing for entrance.

In other words, “anyone off the street” could have potentially attended Compassion.

Senate President Mack Volk has cited an event’s “impact on the campus” as the key criterion for funding. We couldn’t agree more.

But we’re still trying to figure out what impact Compassion had, besides blowing a gaping hole through the SG budget.