UNF students look for support in mission to divest 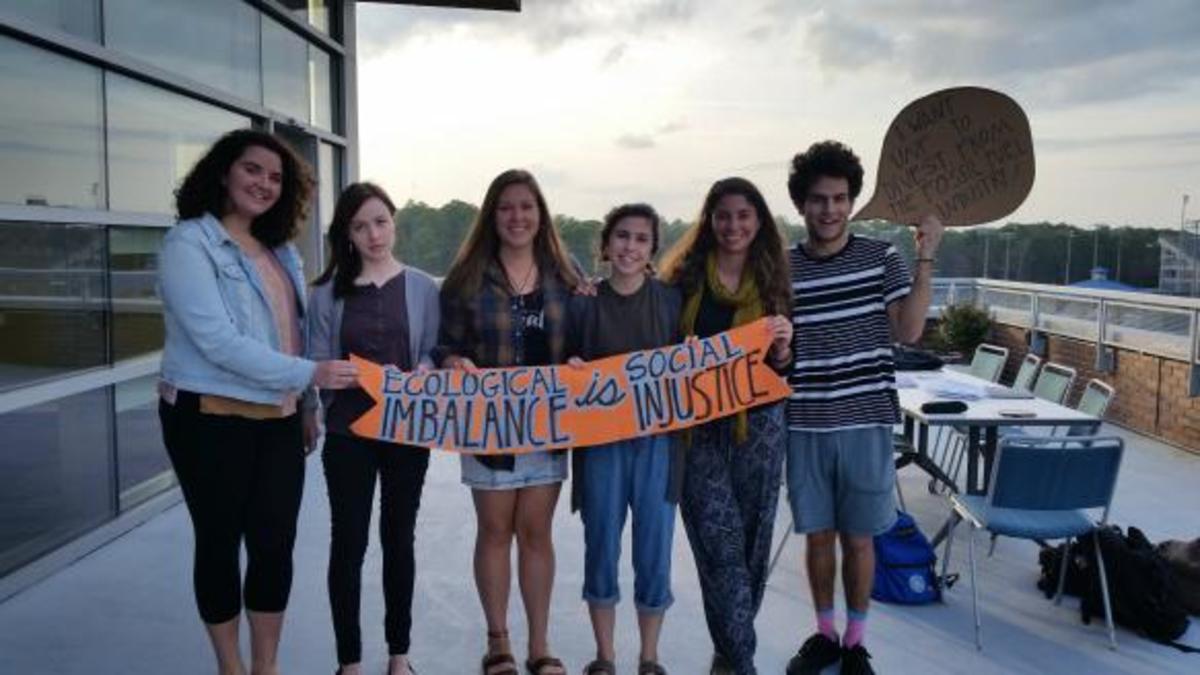 DivestUNF meets weekly on campus to discuss strategies in their fight for climate justice.
Photo by Amanda Dawson

A student-led initiative at the University of North Florida is coming to One Spark 2015 to gain support from the community in order to get the university to sell its investments in fossil fuel companies.

The DivestUNF group is urging UNF to reconsider investments that group members said they believe are harmful to the planet. They want UNF to divest in fossil fuel companies and reinvest in renewable energy sources.

The group is asking for $1,000 at One Spark to build a website and provide training for the group members to teach workshops on climate issues. They are also looking to collect more signatures and support for their petition.

“Our focus at One Spark is not about the money. For our project, it is all about gaining networking and support from the community,” Natalie Sassine said, one of the project’s leaders. “We want everyone to know that UNF students care about our environment and how our money is invested.”

The DivestUNF project began in 2013 by past UNF students Lizzie Wood and Ryan Holm. Since the beginning of the movement, a small group of students have been mobilizing, attending workshops and collecting signatures for their petition.

Sassine is a sophomore and a fine arts major. She was born in Miami, grew up in Islamorada in the Florida Keys, and moved to Jacksonville to attend UNF. Sociology professor David Jaffee is the faculty advisor.

The students initially presented their divestment petition to UNF President John Delaney and the UNF Foundation in April 2014. The university heard their petition but made no motions to change school policy.

DivestUNF has continued gathering signatures and the group’s petition currently has around 500 names. The student petition is very specific in focusing on three goals. It asks UNF to:

Immediately freeze any new investment in the largest 200 coal, gas and oil companies that own oil, gas and coal reserves.
Divest from direct ownership and from any commingled funds that include fossil-fuel public equities and corporate bonds within five years.
Reinvest 5 percent of the university’s endowment into energy solutions and the Jacksonville community.

“We want to be clear,” Sassine explained, “we believe divestment is a tactic for social change and not a solution for climate change. It’s a right step in the much bigger climate cause.”

This UNF student campaign is part of a larger social movement geared toward dealing with climate change. Groups such as 350.org and studentsdivest.org are providing resources and training to student groups and various organizations all over the country. This training is geared at spreading knowledge about climate change and different energy options.

So how much money does UNF have invested in fossil fuel companies?

As of now, this question is impossible to answer.

A majority of university investments are handled by the UNF Foundation, a nonprofit organization responsible for collecting financial donations. This money is then passed on to the foundation’s investment firm, Perella Weinberg Partners.

The foundation currently has a Socially Responsible Investment Policy that states it will remain neutral in determining the ethics of investments. Staying neutral means that the university does not handle determining whether something is socially responsible or not.

“The only reason you have to be fully transparent is if you believe there is some investing that shouldn’t be done in a particular area,” Foundation Treasurer Shari Shuman said in a Spinnaker article last year. “The foundation determined its most important thing is to maximize financial return.”

DivestUNF members said they believe that social responsibility should be a greater priority. One of UNF’s six core values is responsibility to the natural environment. The DivestUNF group believes that this value should apply to investments.

“If you have a set of values at the institution, then you want to make sure the way you are getting the return on the investment is not based on investing in industries which engage in activities that counter our values,” Jaffee said in 2014.

The DivestUNF group said that being environmentally responsible doesn’t necessarily compromise financial goals. Members have many ideas for other projects that UNF can invest into, such as solar energy.

“I find a personal stake in this ‘fight for climate justice’ when thinking of island nations and coastal communities who are facing the dismal threat of sea level rise,” Sassine said. “I am a native South Floridian who has lived on an island up until moving to Jacksonville to attend UNF. I want people [being affected by climate change] to have a voice and for that voice to be heard.”