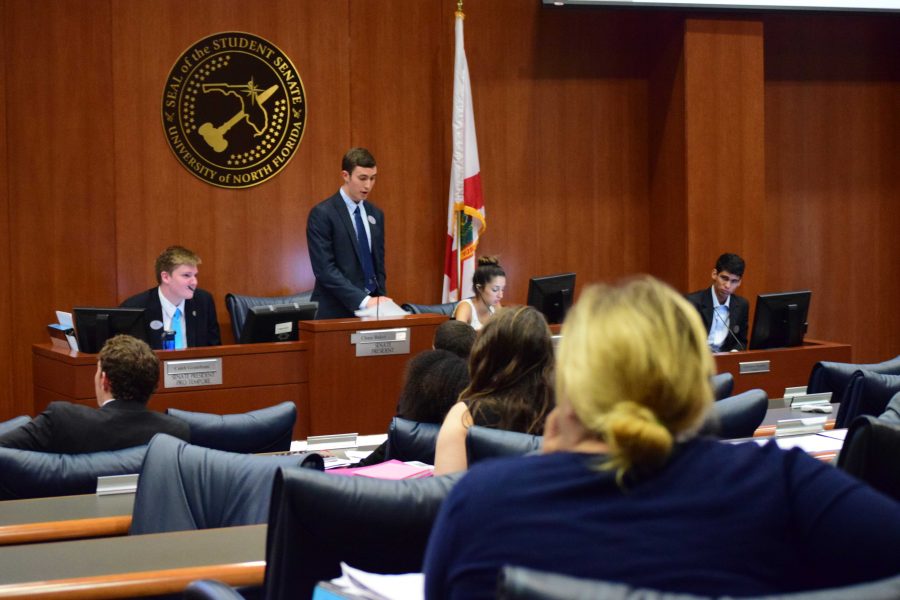 During their July 6 meeting, SG senators passed a $60,500 funding request to contract a state lobbying firm and fund travel for the Office of Governmental Affairs (OGA). Eleven voting senators represented UNF’s 16,187 students, and nine voted to pass the bill, while two senators said they felt blindsided by the proposal.

Before discussion on the special request, each SG branch delivered reports to the 11 voting senators at the meeting. Senators were also updated on a handful of agenda items, like the impending arrival of Einstein Bros. Bagels to UNF’s campus and the appointment of a new student advocate.

According to SG’s website, the Senate’s headcount is 34 active members out of 40 seats. Some senators were on vacation or leave of absence, so 11 senators established quorum to vote.

“Tallahassee is incredibly important, and it continues to become more important every single year. Currently, our state legislature controls our tuition and they also control the amount of credit hours you can take above the credit hours for your major,” Wilson said.

Senator Gustavo Ascanio said about the contract, “We have seen how great sacrifices bring a lot of good results. That’s the way I see it right now. It’s a lot of money, so it’s something you really have to think about, but I have to say that putting UNF on the map of state legislature is priceless.”

Those presenting for the request said Brockelman’s lobbying is to help gain recognition for UNF’s student body during Florida’s state legislative sessions in Tallahassee. Brockelman will act on behalf of SG members when they cannot do it themselves.

“They’re going to provide expert guidance,” Wilson said of SSG. “They have years and years of experience and years and years of data, analysis, and research. They’re also going to offer increased access to top decision makers, such as the governor, senators, house of representative members, and our mayor.”

The remaining $10,500 in the request will support travel and program needs for members of the OGA. The OGA plans on attending multiple political events in Tallahassee, such as the annual Rally in Tally.

Senator Bottom was in China during the BAC’s June 15 meeting. Bottom said he was concerned about voting on SB-15SA-2875, a bill he didn’t see until the day of the July 6 meeting.

The bill was not included in the official agenda that was sent to senators, three days prior to the meeting. It was added to the agenda a few hours before the start of the meeting.

The Senate approved the request 9-0-2, with the two “no” votes cast by Senator Bottom and Senator Austin Daniels.

While Bottom said he did not think the request was a bad idea, he asked the other senators to table the bill until the last week of August, when more senators will be present.

Spinnaker reached out to Bottom, who declined to comment on the bill.

Senator Daniels, during the discussion on granting the request, questioned whether students had been asked if they wanted a lobbyist. Gloster responded that students did by voting for the United Party. According to a news release given to Spinnaker on July 9, the request was based on the party’s “campaign promise to increase engagement in higher education policy issues that affect students.”

During discussion on the bill, Daniels commented that attempting to pass this request through Senate during summer was for reasons other than the State legislature’s upcoming session.

“[Gloster and Guerra] said that if you want to get something large money-wise to pass through the Senate, to do it during the summer,” Daniels said. “Because that’s when it’s easiest. And that’s exactly what they’re doing here. They’re using every trick they know.”

Gloster discussed other initiatives earlier in the meeting, announcing Osprey Voice results. According to the results, Coyote Jack’s and Quiznos are the two least liked food options on UNF’s campus. The Osprey Voice results are in accordance with the incoming Einstein Bros. Bagels addition, which would replace whichever restaurant UNF students liked the least.

“There was a survey done last year saying that students wanted two [new restaurants]. [The first,] Chipotle, goes to no college campuses, so that’s why that one was out. Einstein’s got the second-most votes,” Gloster said.

Senators also approved the appointment of Connor Klein as SG’s Student Advocate. The student advocate typically acts as a student ombudsman, just like the university ombudsman. The student advocate can do things such as help students make grade change appeals, or simply facilitate communication between students and SG representatives.

“I would like to make it more of an advocate role,” Klein said. “I would like the student advocate to have more of a role in the judicial process as well as creating a better liaison between the 12 departments which I will be overseeing.”

Senate tabled the Real Food Campaign discussions for review during the Senate’s next meeting on July 20.