The tiny frontier: nanoscience at UNF 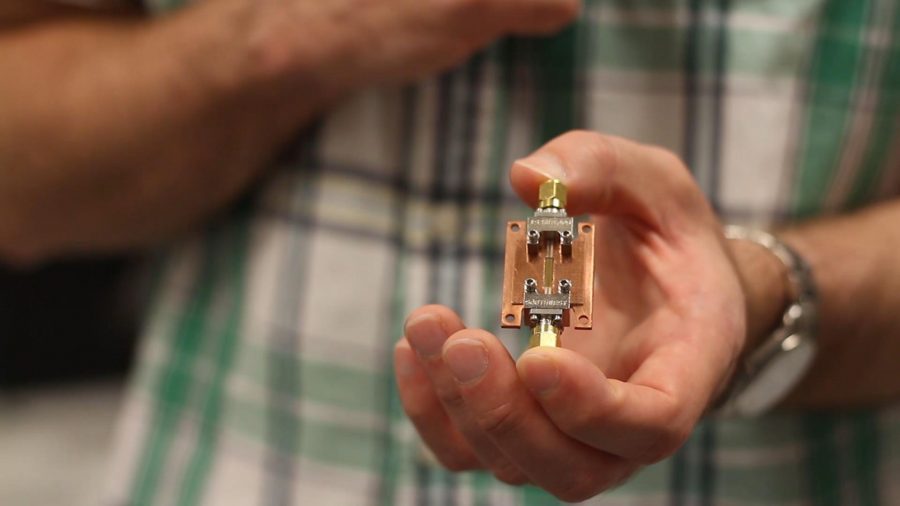 Santavicca holding one of the sensors that is able to be connected to standard equipment. Photo by Michael Hererra

A $500,000 nanotechnology research grant was awarded to UNF Assistant Professor of Physics Dr. Daniel Santavicca in a partnership with the Massachusetts Institute of Technology (MIT), according to a June 30 press release.

Nanoscience is a vast frontier for UNF’s student explorers to discover, covering topics in chemistry, physics, and engineering.

The National Science Foundation’s three year grant will focus on sensitive, hyper-fast light detectors that can catch photons, the smallest particle of light, at a high rate.

“I’m interested in kind of studying the electrical properties of things that are very small and typically very cold,” Santavicca said.

Small and cold are the recurring themes of Dr. Santavicca’s overall research.

“When you make things really small, they can behave differently from kind of your normal, everyday, macroscopic objects,” Santavicca said. “And the cold is really just to get rid of the thermal energy, which you can think of as just kind of jiggling of stuff.”

This “thermal jiggling” can wash away an object’s nano-properties.

Practical applications of nanotechnology related to Dr. Santavicca’s work exist or are in development, but they do have limitations.

“One has to do with kind of deep-space communication,” Santavicca said. “So NASA has some interest in this technology because if you think about sending data, say between Earth and Mars, that’s a very long distance to cover.”

Without nanotechnology and photon detectors, the data transmission would be too weak to receive or detect on Mars.

“So, you want detectors that can detect really really weak signals, down to the single photon level,” Santavicca said. “So the idea is that you could use these detectors to have, basically, a gigabit type data link that would cover an insanely large distance, and the sensitivity of these would allow for the fact that over those ridiculously large distances, from like Earth to Mars, the signal would get really really weak.”

And the photon detectors could pick up that weak signal. Colleagues of Dr. Santavicca received data at high-speeds from a satellite orbiting the moon to Earth using nanowire detectors.

“They showed they could transfer data at some 10s of megabits per second, data rates from the satellite orbiting the moon, to the Earth,” Santavicca said.

Not only does this data move at super-speed – it’s highly secure as well.

“In quantum communication you can encode information in the state of a photon, maybe the polarization state, in such a way that if somebody eavesdrops on the signal… it will actually change the photon in some non-recoverable way,” Santavicca said.

The data, in this case the photon, is truly sensitive material. If someone tried to intercept the photon message, the photon’s physical properties are altered and the data thief is thwarted.

Nanoscience is a cross-disciplinary subject, not limited just to physics and technology. Some of UNF’s engineering students work on research related to the nanotechnology grant. Assistant Professor of Mechanical Engineering Dr. Stephen Stagon said his undergraduate students have a great opportunity to work on pivotal research in nanoscience.

“At a primarily undergrad university, it’s actually a totally different model than you’re used to at a research 1 university,” he said. “So at the undergrad university it’s more of a direct mentorship coming down from the advisor. So I will set up experiments, discuss, and train the students.”

Dr. Stagon said the undergrads are pivotal worker bees, running experiments for the department and giving feedback on their studies.

While nanotechnology may seem interesting in general, Dr. Stagon said students become turned off or intimidated by nanotechnology once they see the intense dedication and detailed research involved in studying nanoscience.

“The students that are willing to dive in a little bit further really, really become interested in it,” Stagon sA grant from the National Science Foundation will soon have UNF’s researchers studying all the small things. aid. “Because they see manipulating all the variables, and how everything starts to play together.”

Nanotechnology is incorporated into conventional technology within a considerable range, but Dr. Stagon said he thinks that people are taking this science for granted.

Smartphones, a must-have in today’s society, are indeed a product of nanotechnology, according to Assistant Professor of Chemistry Dr. Thomas Mullen III. Gold, or “bling” as Dr. Mullen calls it, is significant to contemporary technology, mostly due to its wide use in lithography to develop computer chips.

“So the idea is that Intel and other photolithographic companies, entities, are really good at using what we call photolithography,” Mullen said. “These are things that are done in clean rooms the size of the campus, UNF’s campus. Intel has these facilities, that’s how they make computer chips.”

UNF doesn’t have the resources to practice photolithography the way that Intel does.

“My interest is developing techniques that enable us to get that type of resolution, but on a bench top that an undergraduate can use,” Mullen said.

UNF’s chemistry undergraduates have a golden opportunity to get hands-on with research that they couldn’t do at a larger university.

Amy Brownfield, a junior at UNF, studies coastal biology and biochemistry. Brownfield’s overall research focuses on water quality, specifically how it affects different organisms. UNF’s smaller class sizes in the science departments allow for a more personal interaction between professors and students, according to Brownfield.

“I think it’s absolutely critical,” Brownfield said. “Especially for anybody in any kind of science field to get that hands-on experience in a research lab.”

Brownfield said that Dr. Mullen has been a great asset to her studies as her research advisor. Brownfield has already published one professional research article, with the help of the chemistry department, and earned a scholarship she didn’t even know existed without Dr. Mullen’s guidance.

While Dr. Mullen’s students focus on the fundamental aspect of nanoscience, the research will eventually lead toward progress in the medical field.

“This eventually will lead to things such as biosensors, molecular electronic devices, or test pads essentially,” Mullen said. “So if you want to screen for this one interaction, say for a cancer drug, the idea is you can put this cancer drug on a surface, an array, and then you can test it on a variety of proteins.”

Nanoscience, or surface science, is a relatively new concept, about 30 years old, but its real and theoretical applications can make a giga-impact in science for the future. No, there aren’t any nanite robots ready to take over the world, but nanoscientists have different fears over the fate of nanotechnology.

UNF students have a chance to become true pioneers in the thriving field of nanotechnology, science’s tiniest frontier.