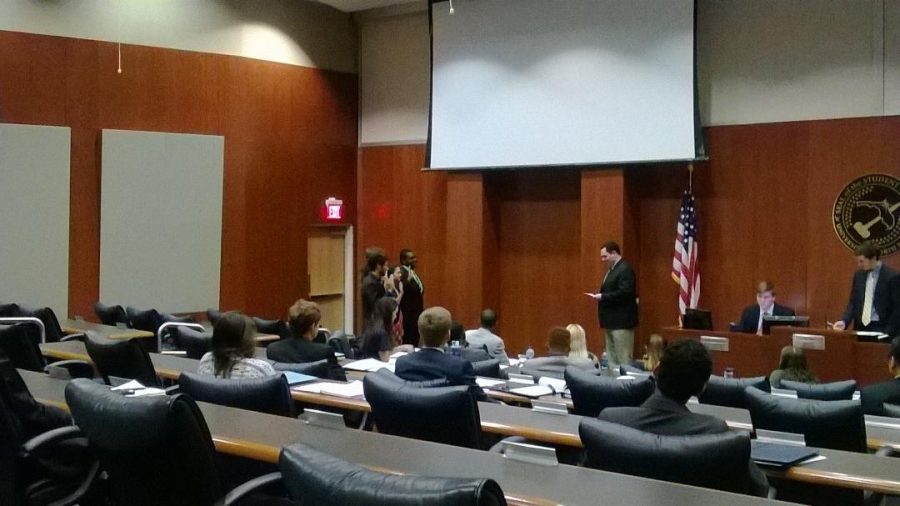 Three new senators and two justices were sworn in by the Chief Justice. Photo by Jeremy Collard

According to Wilson, legislation to allow guns on college campuses is currently being addressed in Tallahassee, and Brockelman would represent UNF’s position on that issue.

“The UNF Board of Trustees and the Board of Governors have fought against this in the past, and there will be stronger opposition against it this year,” Wilson said. “We want, as an administration, Student Government support and the student body support before we act in Tallahassee.”

Wilson also stated that lobbying efforts may be directed at obtaining Public Education Capital Outlay (PECO) funding in the $11 million dollar range. PECO, a program established in 1963 by the Florida Board of Governors, funds building construction and maintenance projects for public universities.

According to a Florida Office of Economic and Demographic Research press release, the current PECO funding appropriated, as of Aug. 2015, sat at $419.10 million dollars.  The $11 million dollars sought by UNF, if lobbying efforts succeed, would be used to renovate buildings three and four. There, new lab facilities would be constructed.

“The problem we have at UNF, being on a wildlife sanctuary, is that we can’t build out,” said President Hailey Guerra, “so we need to build up. Buildings three and four are the oldest on campus, so renovations, mostly labs, would be directed to those buildings.”

Three potential senators were also addressed during the meeting, as a senate vote would mark the final step of approval before taking office. Senior Kristoff Nicholson, freshman Seth Johnson and freshman Nina Lee were each questioned on Senate floor.

When at the senate podium, candidate Nicholson spoke on transparency and due diligence as a senator.

“In the UNF constitution, it says that there can be one assistant director position funded for Osprey Productions, and currently there are two,” Nicholson said. “That is illegal, and what I want to know, is why haven’t current senators asked any questions about that?”

According to Nicholson, current members of SG and SG advisers have stated that they are working on remedying that situation, but nothing has yet been established.

“It took a lot of courage to stand up and hold us accountable, especially in this setting,” Jordan said. “I encourage my colleagues to approve Mr. Nicholson.”

All three senate candidates were unanimously approved, and would potentially hold that seat through the end of the spring semester.

Senate will break into committees on Oct. 5 beginning at 5:30 pm.