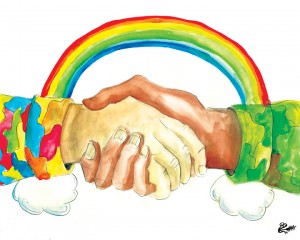 People who believe in and reciprocate one another’s belief in one another constitute a nation.

One of the strongest ways to acknowledge another as “part of my nation” is to defend that other person – to fight for them, and by extension, the nation.

To tell openly homosexual individuals they cannot fight for our country is, then, to deny their attempt at acknowledging others (and by extension, themselves) as part of the nation. It is to judge that individual’s acknowledgement of national unity as invalid and effectively ostracize him or her.

“Don’t Ask Don’t Tell” gives homosexuals two options: forfeit their right to acknowledge themselves as part of our “more perfect union” or deny their identity as homosexuals in order to serve the country.

Neither of these options is acceptable.

We strongly believe the “Don’t Ask, Don’t Tell” policy is detrimental to individuals, the country’s safety and national unity.

The U.S. military is struggling to make enlistment quotas as it is, yet they deny healthy, driven and competent individuals based on a sexual preference that is out of anyone’s control.

More than 12,000 individuals have been discharged under DADT, and about 5,000 homosexuals annually decide not to re-enlist after their terms of service has expired because of DADT.

Moreover, it is profoundly ironic that the military – a subtextually homoerotic institution – would discriminate against homosexuals. To be sure, we are not saying that is gay as such; nor are we accusing anyone in the military of being homosexual.

Consider the qualities that the U.S. military espouses: strength, courage, tenacity and discipline – all “masculine” qualities in our society. To put it colloquially, you have to have balls.

The army romanticizes the image of the manly man and tell soldiers to aspire, to lust, for that ideal. Soldiers eat, drink and sleep with a fully automatic phallus slung over their shoulder and high-ranking personnel are awarded with a sabre.

We are by no means saying women cannot or should not posses said “masculine” qualities. We simply want to point out the hypocrisy that the military denies transgender individuals while surreptitiously engaging in gender-bending practices which serve its own ends.

Furthermore, the armed services’ term for romantic relationship between two soldiers – fraternization – is also implicitly homoerotic. To engage in any sexual act with another soldier is to engage in that act with one’s brother – “frater” being Latin for brother.

Washington: Repeal “Don’t Ask, Don’t Tell” and accept the fact openly gay individuals can and do love this country as much as any heterosexual. If empathy ain’t your bag, then at least realize the larger pool of qualified people from which our military can draw, the better off we will be.