Anatomy of a show: Death Grips bring down the house at Freebird Live 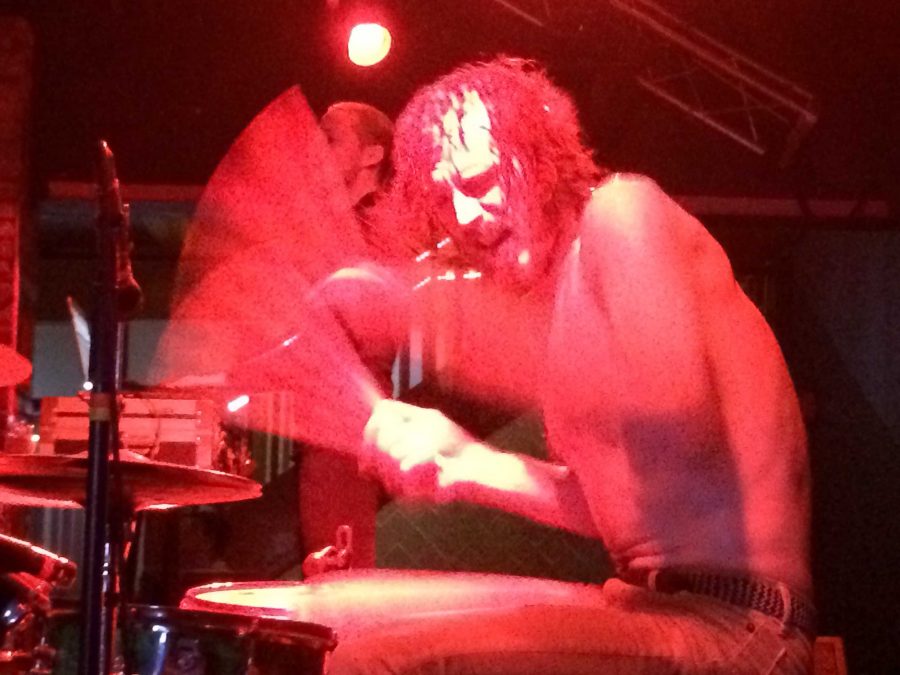 Drummer Zach Hill hammered away on the kit for over an hour. Photo by Douglas Markowitz

Where you stand at a Death Grips show is everything. More than any other band, your position in the venue affects your reception of the violent din they create. And the best possible positions are either as close to them as possible, or at home.

To be in tune with the band is to ritualize them. The visceral experiences they create are based around a sort of intense, elusive otherness that they’ve spent years cultivating through rumors, riddles, games, hints about releases and tours and — most often – clear publicity stunts. On their last tour, they failed to show up for gigs, replacing their performances with what was allegedly a suicide note from a fan projected on a screen. Last year they posted a breakup note on Facebook, yet mere months later they released new music, and now they’re on tour. Unforgettably, in 2012 they leaked their own album to fans, causing them to be dropped from Epic Records. The reason? It was a full moon.

Through their abrasive, outsider hip-hop sound and deliberately erratic behavior, Death Grips have assembled a cult-like following. Due to their seemingly intentional desire to resist mainstream appropriation, most of their fans find and view their work through the internet. With that in mind, it follows that there are two preferable ways to practice in the cult of Death Grips. The first is to shut yourself away, dim the lights, and blast their music, letting its power work you into a fit. The second is to enter their temple and get as close to the altar as you can.

On Tuesday, Oct. 6, the temple was Freebird Live in Jacksonville Beach. The venue, soon to close, is known for giving concert-goers a variety of views thanks to its open pit and second-floor balcony. I began the night on the balcony, dead-center in front of the stage, but throughout the band’s set I felt a distance that could only be reconciled by moving closer. So I descended into the fray–and what a difference it made.

Their set up is a simple triangle. To stage left, producer Flatlander controls the music. He fills a necessary role, but he’s in the background for a reason. Drummer Zach Hill, stage right, improvises above the blaring beats, and Ride struts and frets his way across the stage in front of them, as if in a feverish trance.

MC Ride is the focal point of the performance. When viewed from above, his movements look gangly and awkward, but in the pit, he is an overseer, lording over the maelstrom of bodies in the pit like a warlock over a pot of brew. His profile – lean, bald, bearded, shining with sweat and covered in tattoos – is half the group’s appeal, the force of nature that wills the project into existence. This is a man visiting us from a different realm, one on the very fringes of society. To see him is reward enough, but he also speaks to us, shouting messages of paranoia and violence rendered unintelligible by Freebird’s poorly-mixed amplifier setup. Up close and through the lens of the internet, he is a man possessed by fear and suspicion. They make him move in inhuman ways, and it is majestic to watch.

But even more majestic is Zach Hill. The facts stand for themselves: every evening, he plays the drums continuously for over an hour. Flatlander’s seamless song-to-song transitions make it impossible for him to rest for even a moment. And it’s certainly not a couple of beats here and there – he slams into the kit rapidly, as if to punish it, and does it for so long that he might as well be punishing himself. Twice he broke a stick, and then simply picked up another and began again. Only once did he ever drop one. I got as close to the stage as I possibly could, right up next to Hill bashing away, and found his instrumental fury more affecting there than anywhere else in the venue.

The set was heavy on favorites from The Money Store and newer tracks from this year’s The Powers That B. There was no opener or encore. The band simply came on, did a noticeably short set and ended it abruptly. At the time, it felt like a cop out, that I had let my anticipation get the better of me. But the more I reflect on the show, the more it impresses me. Hill never stopped drumming, but he also never divested from the rhythm. That he does this several nights a week and doesn’t drop dead from exhaustion is a testament to his skill and endurance. He’s the closest thing we have to a superhuman.

Just as those in a trance can only reflect on their experience before or after it, Death Grips transports their audience to their domain, if only for a short time. They suspend a single moment in time for as long as they will it, and we are privileged to hop on for the ride.

Correction: An earlier version of this article referred to the group’s 2015 album as The Powers that Be. We have amended the error.

For more information or news tips, or if you see an error in this story or have any compliments or concerns, contact features@unfspinnaker.com.