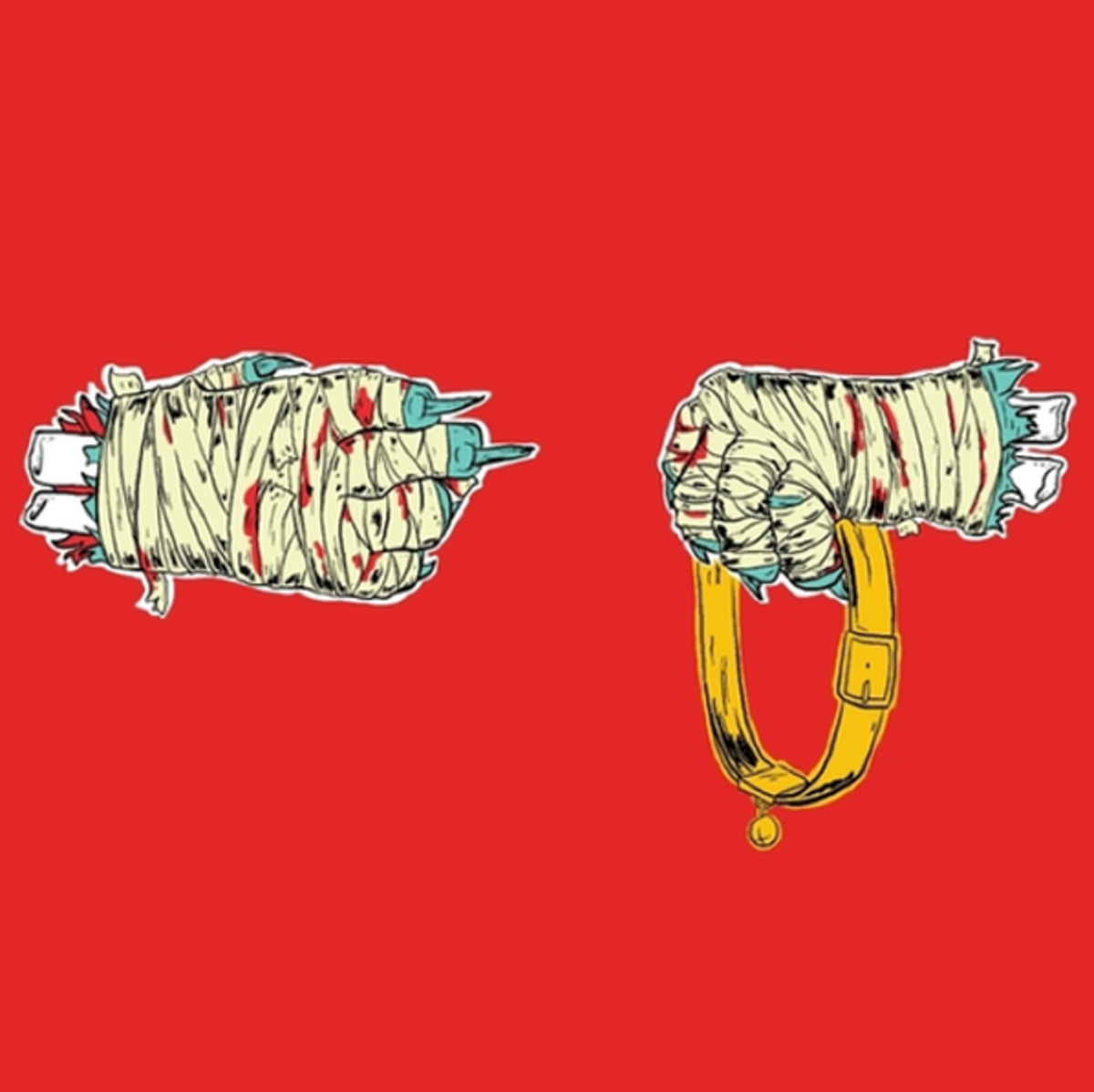 The following is filled with cat puns. Very bad ones. You have been warned.

Time to make a cat-fession: the first Kickstarter I ever contributed to was a rap album made entirely out of cat sounds.

If you think that’s a joke, you’re halfway right. Meow the Jewels began its impawssible prowl to existence as a gag on celebrated rap duo Run the Jewels’ (RTJ) online shop. A listing for the “Meow the Jewels Package” declared that for a cool $40,000, “Run the Jewels will re-record RTJ2 using nothing but cat sounds for music.” It was a goof among goofs, a feline folly in the midst of a series of purrhibitively expensive “BONU$” packages that no one in their right mind would pay fur. And then somebody tried to pay fur it.

Seemingly overnight, a Kickstarter appeared asking for funding to aquire the package and get the guys to rerecord their excellent 2014 LP Run the Jewels 2 with cats. Because the site declared that whoever was insane enough to purrchase the package was “free to profit from this album in any way you see,” the Kickstarter-starter reasoned that he could secure backing to buy it and then give it away to the denizens of the internip.

At this point, the cats in Run the Jewels themselves decided to get their claws dirty, along with some other meowsicians: Zola Jesus, the Alchemist, Dan the Automator and Portishead’s Geoff Barrow were among the baker’s dozen or so artists that promised contributions, and Just Blaze pledged to kick in a kit of all the drums he used from 2001-2005. The group’s beatmaker El-P promised to donate the money to “somewhere that will directly benefit the families of Eric Garner and Mike Brown,” which is what brought me on board. And the cat-obsessed internet, amewzed that this was actually happening, funded the project with 12 days left.

Now, Meow the Jewels, the joke album willed into existence by strangers, is finally here, released last month fur free, just like Run the Jewels’ other albums. Technically, it’s the only thing RTJ have made that I feel like I’ve paid fur. I didn’t expect anything interesting – as I said, I gave money to the project because of who it would ultimately be going to. But this is Run the Jewels we’re talking about, a duo that goes in on efurrything they do, and due to the inherent silliness of making an album out of cat noises, they decided to go in even further. And so, Meow the Jewels is no fluff: this kitty has claws.

Very sharp claws, actually: Meow the Jewels is also pawsitively terrifying. The group makes heavier use of roars, growls and purrs than tamer meows, pitch-shifting and twisting their cat sounds into a blur of rumbling, screeching furry fury. Against a backdrop of beats even more vicious and skin-crawling than the original album’s hardened, blunt-furrce production, Killer Mike and El-P’s angry, political raps are even more frightening. That doesn’t mean the album is better, of course, just a different flavor. The songs are sequenced the same way as on the source material, but because each song is handled by one producer, it lacks cohesion. It’s important to know that this is essentially a themed remix album. It’s a high profile one, certainly – in addition to all the purrsonnel above, the project also features Massive Attack, Boots, Snoop Dog and Lil Bub (yes, the Lil Bub, the famous cat from the internet), among others – but everyone has their own take, and oddly, they all went fur the jugular.

Ironically, I’m a little sad that Meow the Jewels was taken as seriously as it was. El-P and Killer Mike took a joke and ran (on all fours) with it, and thus the album is a purroughly professional, somewhat unpurrleasant take on an excellent album. It’s admeowrable, extraordinary even that they did what they did with these cat sounds, proof that you can make anything a hit as long as you’re good enough at what you do. But while it may be an unfurgettable experience, it won’t be something I return to often. It’s a relief that RTJ finished the project in time fur Halloween, because Meow the Jewels is so good it’s scary.

Ironically, this long-awaited release from one of the most tragically unsung R&B singers currently working is less of a hallucinogen and more of a relaxer.

Following up on her excellent mixtape CUT4ME, which came out of nowhere in 2013 to earn a surprising Best New Music from Pitchfork, Hallucinogen was originally slated for release in April, but was held until now for some fine tuning (and presumably to secure a release from always-tasteful label Warp). It certainly shows, as these six songs deftly displays Kelela’s voice and songwriting above an inspired collection of beats.

Hallucinogen makes us move, but it doesn’t make us dance. With their heavier bass, most of the tracks reverberate through us like a massage, especially on the dramatic “Gomenasai” and the beating-heart conclusion “High.” These lower-key tracks bookend the clubbier centerpiece “Rewind,” which bumps with a classic-electro-style beat until diverting into trap territory. Its place in the middle ensues the EP’s excellent sense of pacing, which saves it from being a simple collection of songs.

Kelela’s lilting, understated vocals and lyrics give Hallucinogen its emotional heft, but as always, the most important part of any hip-hop release is its production, provided here by a killer lineup of collaborators. The most high profile of them is Venezuelan underground wunderkind Arca, who worked with Bjork earlier this year and who adds his input to the EP’s best track. Opener “A Message” reverberates with the producer’s warped, pitch-shifted vocal effects and cavernous, languid bass while Kelela’s confessional words give us shivers. Arca also assists with the title track, but it can’t compare with its intoxicating twin.

Hallucinogen is Kelela’s best project yet, but it also functions as a showcase for its producers, which also include DJ Dahi (Vince Staples’ Summertime ’06) as well as MA of Nguzunguzu and Kingdom, both of whom worked on CUT4ME. Ultimately, however, it’s the songstress that directed them, and to her goes most of the credit. Together, they’ve assembled one of the smoothest, most concise releases of the year.

Footwork would not be where it is without the late DJ Rashad, but he couldn’t do it alone. The frenetic, high-energy, impossible-to-dance-to-but-impressive-to-watch electronic dance scene that has now moved worldwide from its home of Chicago did so mostly on the strength of his hit 2013 LP Double Cup. On it, only one track lacks a feature from one or more of his friends in the production crew Teklife. Every career move Rashad Harden made before his passing was made with a sense of community, a desire to send up the crew, the scene and the city he called home. And now, even as the remaining members of Teklife finish mourning and prepare to jumpstart their own solo careers, his presence still asserts itself. That’s not a metaphor – DJ Rashad is featured on the best footwork track of the year.

The track in question, DJ Spinn’s “Dubby,” isn’t exactly unique because of that. There’s a lot of posthumous material from Rashad floating around, from the lackluster We On 1, released just a few weeks after his death, to the slightly disappointing6613, put out by Hyperdub earlier this year. But “Dubby” blows them all away. After a zippy soul sample whisks us away to Chicago, breakbeats and synths move us into the inner city, where footwork’s heart resides. Before we know it, Detroit’s unofficial poet-laureate rapper Danny Brown jumps on the track for a bit of inter-city solidarity. “This is how my hood work,” he raps, speaking for both the Chi and the Motor City, weaving a defiant tale of two cities that haven’t lost their artistic touch in hard times.

Years from now, we may look to “Dubby” as a rallying call for both footwork and Chicago, proof that even when inspiring figures like Rashad move on, those still around can keep the music going. DJ Spinn seems to be trying that with Off That Loud, his debut EP for Hyperdub, and the results are mixed, with the EP’s second side vastly outpacing the first. Bombastic opener “Throw it Back (feat. Taso & Mimosa)” blatantly panders to the PLUR crowd, betraying what makes footwork interesting by burying it under beats and effects straight out of trap. It may be an attempt by the Teklife member to appeal to a wider audience, but it falls flat. Next comes the unremarkable “The Future is Now” before the smoother title track gets us ready to finish off with “Dubby.”

Off That Loud is one of the first attempts from a post-Rashad Teklife to keep up the good work, and even if it contains only one truly wonderful track, it still represents the genre’s ability to roll with the punches. Many movements have died with their leaders, but footwork seems keen on preventing that from happening.

Protomartyr – The Agent Intellect: So, we’ve got the brash, fuzzy post punk vibe, a half-singing, half-speaking frontman, sick riffs, suitably grim lyrics – should be a perfect storm, but it’s not. Certainly not as memorable as their last album, Under Color of Official Right.

Zomby – Let’s Jam!!: Technically two EPs released simultaneously, this mish-mosh of UK electronic genres including house, dubstep and garage is dark, glamorous and undeniably smooth on the first half and bold, trap-like and militant on the second. Any self-respecting EDM fan will want to jam to this.

Nicolas Jaar – Nymphs IV: The producer and former member of Darkside continues his yearlong hot streak with the latest installment in the Nymphs series. It contains only one track, but what a track: “Fight” chops up Jaar’s falsetto and carries it over eight minutes of indelibly cool beats and morphing synths that sound straight out of James Blake’s early EPs – appropriate, since they share a label with this release, the famous black horse of R&S Records.

For more information or news tips, or if you see an error in this story or have any compliments or concerns, contact features@unfspinnaker.com.