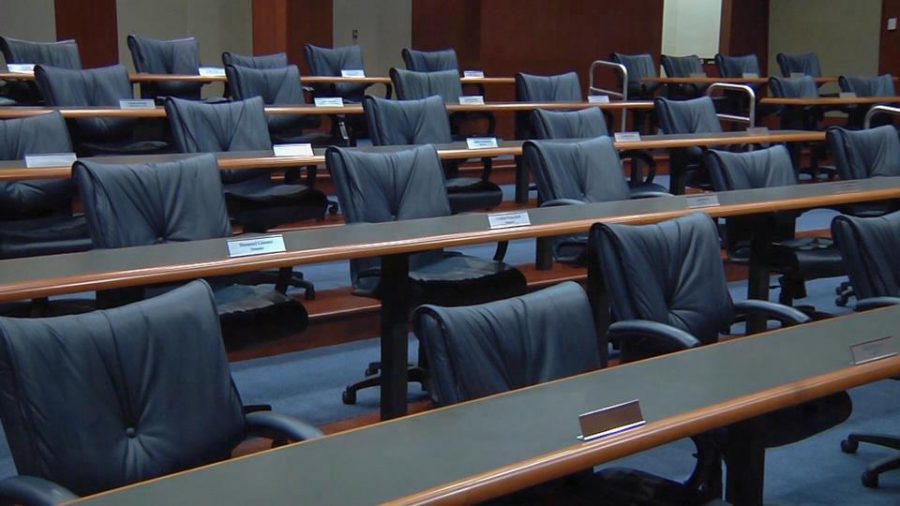 Student Government (SG) committees toiled through a set of agenda items in the Oct. 19 meetings, with a combination of leadership shifts and an influx of newly appointed senators demonstrating that SG has a long, uncomfortable road ahead of them.

Although making progress, it was apparent that proceedings were all but flawless as a number of new senators worked through Robert’s Rule. This set of rules outlines how senate meetings are to be conducted in terms of order of motions, and the diction used to proceed through those meetings.

Fifteen new senators, all undisputedly elected, will fill in the unoccupied seats after the Oct. 27-28 election, and SG will face a dramatic level of inexperience later this year.

Senate Pro Tempore and Constitution and Statutes (CSC) Chairman Caleb Grantham announced last week that he would be taking over as Chief of Staff, effectively opening up both roles for new leadership.

Senator Dallas Burke will leave his current seat with the Budget and Allocations committee for new leadership as Pro Tempore.

A replacement for the vacant CSC Chair has not yet been announced.

Keefe pointed out the low number of responses for the October survey, while the September survey recorded 381 student responses.

“We did the same exact thing, it was put up online and on Facebook and Twitter,” Keefe said. “It was disappointing.”

Keefe said the results for this month’s Osprey Voice will be held for SG records.

Students will have an opportunity to be heard on Oct. 27-28 as the election ballot will allow for a direct vote by the entire electorate, asking students to provide their opinion on the gun topic.

The Constitution and Statutes Committee unanimously approved Title III revisions that would lead to the restructuring of the Executive Branch, and a deadline for the president to fill in branch vacancies.

The attorney general, treasurer, student advocate and agency directors would make up the cabinet instead.

Attorney General Dana Baker said the move would provide more room for those members of the cabinet to move without political pressures.

The committee will send these revisions to the general senate next week for final approval.

Cru requested $2000 in order to send students to the Cru Southeast Winter Conference. According to the Cru spokesman Joel Jones, participants will listen to speakers who encourage self-development, reflection and meditation.

Cheyanne Ruben requested funding $500 for airfare to San Francisco, where she will be attending the Biennial Conference on the Biology of Marine Mammals. She will present her findings on nutritional and dietary influence on metabolic hormones in seals.

According to Ruben, she plans on being an ambassador of the university at the national level.

Chairman Gustavo Ascanio advised senators to exercise diligence in voting before moving on to a vote for a senate appointment.

Sophomore Christian Fleming discussed his qualifications before the committee that unanimously voted to move his application to general senate next week despite Fleming’s inability to read through the UNF Constitution before seeking appointment.

During the interview, newly appointed freshman senator Seth Johnson asked Fleming to outline any weaknesses he believes he may have coming in to SG.

“Robert’s Rules, I have visited Tallahassee a few times, but I do not have any family in government. I am pretty unfamiliar with the rules,” Fleming said.