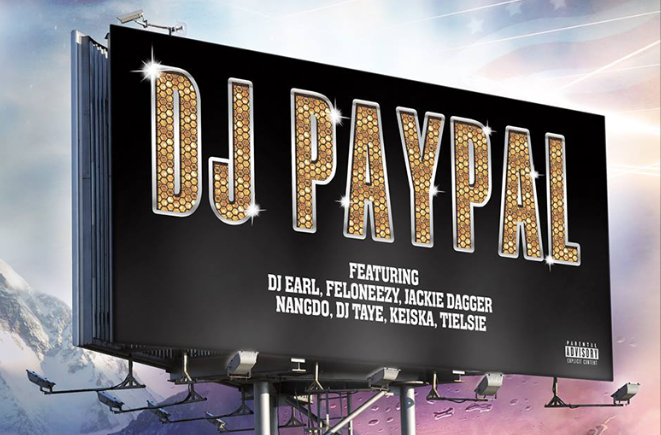 Let’s just come right out and say it: this is the best footwork release since DJ Rashad’s Double Cup, the album that brought the Chicago dance scene international recognition two years ago.

We’ve already discussed the continued vitality of Chicago footwork collective Teklife in a world without its leader, the late DJ Rashad, but much of the dance music movement’s success comes from the recognition it’s received from abroad, especially Great Britain. Most of Teklife – Rashad included – does its releasing on London-based Hyperdub Records. Genre founder RP Boo releases through Planet Mu, who also put out the very first footwork compilations way back in 2010 and 2011, if you don’t count the homegrown Japanese releases from just a few months before. American labels, such as the Flying Lotus-founded Brainfeeder, are just now catching on. But with this short album from DJ Paypal, both label and artist have proven that footwork sounds best without export tariffs.

The dozens of different drums on the opening title track, the chirping choral voices chopped and scattered beyond recognition into the song’s primary melody and the faux horns backing it all up coalesce into an extraordinary expression of intent that’s nearly symphonic. Then there’s the warmth of “Ahhhhhhhh,” with its soul samples that jump and glide, and the clicking, live-recorded percussion effects among more familiar machine drums. There’s the West African drum-and-chant session of “Slim Trak,” the jazzy “Awakening” among the other, equally phenomenal tracks. And then, to top it all off, there’s the dramatic, stunning, seven-and-a-half minute closer “Say Goodbye,” which swaps the dueling drums for a shimmering Japanese-English vocal reminiscent of Janet Jackson above production that seems to float.

It would be easy to deliver a set of stellar tracks, and Paypal has done just that here, but what sets Sold Out apart from even Rashad’s landmark Double Cup is both its structure and its grand sense of scale. There have been footwork releases with excellent pacing, but this album’s definitively marked beginning and end signifies it as a statement. The DJ, who always performs shrouded with a Teklife tee in front of his face, wants to give the movement legs. He wants to ensure that it doesn’t simply survive, but thrive, and he knows the only way to do that is to mess with the formula, to an extent. Sold Out is a perfect marriage between these two needs, signaling a bold new vision while retaining what gives footwork its signature.

This is an album made by a scientist.

That’s no metaphor. Besides being a celebrated DJ with a vast record collection, Sam Shepherd, who makes music under the name Floating Points, also holds a PhD in neuroscience from University College London. After years completing that elusive doctorate, he finally found time to complete the even more elusive album Elania (named for a group of songbirds) this year, after half a decade in gestation.

In our era, when electronic musicians post every throwaway and work-in-progress, it’s rare to see someone take their time in such a way. But then again, Shepherd’s approach here isn’t exclusively electronic, as he joins a crowd that includes Flying Lotus in reviving and transforming the genres that inspired them to start making music. The best example is album centerpiece “Silhouettes (I, II & III),” without a doubt one of the most thrilling, gorgeous songs this year. In three movements over 10 minutes, it glides between intense, seductive fusion jazz and breathtaking orchestral soul. Violins, organs, choral voices and an incessant, propulsive drum beat weave in and out. It took six years to complete, and it shows.

By contrast, the title track, a contemplative, spacey drone was improvised. Shepherd made it after waking from a dream about “atomic reincarnation,” the idea that when we die, our atoms are broken down and reorganized. It’s a scientific idea rendered in poetic terms, and it aptly describes what the album sounds like. It’s equally apt to describe this as a scientist’s album, not because of its creator’s PhD, but because it reflects the beauty of the world that science goes to painstaking lengths to understand. “Argenté,” which follows the title track, illustrates this best, not simply because it sounds like something out of a Science Channel documentary, but also because it sounds organized and full.

Like science, much of what makes up music is math: patterns of repetition, counting, hitting the right notes at the right time, and so on. Science also tells us music is simply vibrations in the air, but put them together in the right way and it will elicit so much more, something I go to absurd lengths to describe to you here.  If their key difference is that science seeks to define the beauty of the universe and that music depicts it, then Floating Points has created one of the purest depictions in recent memory.

DJ Taye – Break It Down EP: More traditional footwork from one of Teklife’s rising stars. Hits hard when it needs to, such as on “XTCC (feat. DJ Earl),” but also divulges in the movement’s affinity for soul on “Go Away (feat. DJ Paypal).”

Car Seat Headrest – Teens of Style: Finally finding his way out of the Bandcamp woods, singer-songwriter Will Toledo kicks it into high gear with this debut for Matador, a collection of rerecorded demos from the last few years. These are classically indie, wonderfully lo-fi tracks with an inkling for introspective, literary lyrics – candy for nerds, but cozy enough to land comfortably in the denouement of a trendy TV rom-com. Save it for your next bout of suburban alienation, or a case of being left behind by your more successful, personable peers.

Rustie – EVENIFUDONTBELIEVE: At last, the leading light of the Glasgow electro-trap scene has produced his magnum opus, ditching the vocal distractions of last year’s Green Language and fusing its high-gloss, vaporwave-on-speed sound with some solid beats. Which is to say: EVERY TRACK IS A BANGER.

J Dilla – Dillatronic: Yet another posthumous release from the renowned hip-hop producer. Cataloguing 41 very skeletal, rather undercooked beats that run the gamut from “okay” to “no comment,” the only real reason to pick up this collection is if you’re a die hard for Dilla. Either that or you want to help his mom pay the rent.