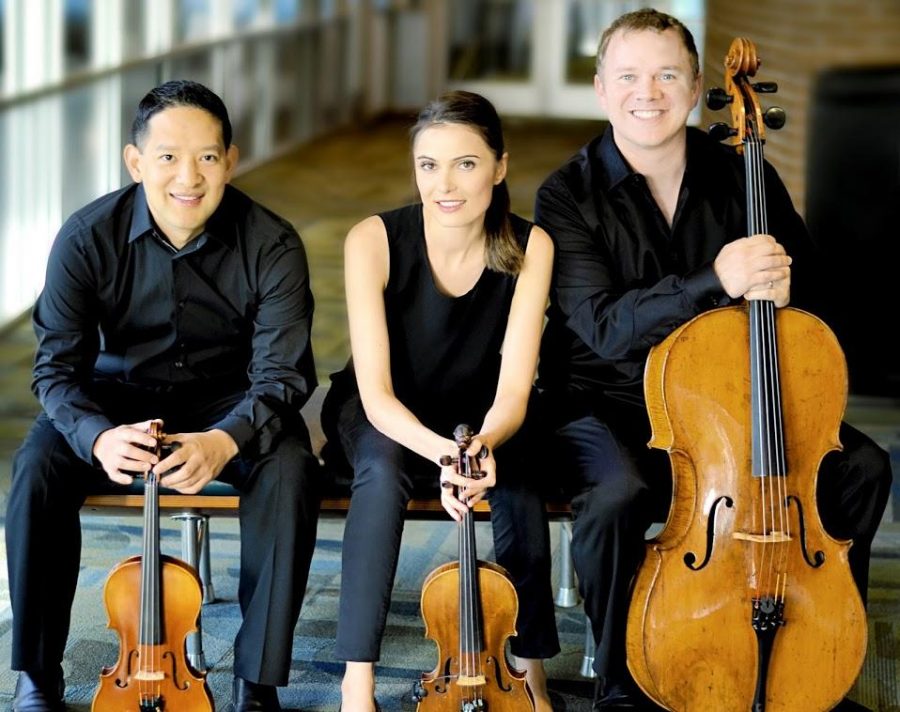 It’s easy to hear beautiful music around UNF’s Fine Arts Center, but on Nov. 20, that music became much more arresting thanks to the school’s resident string ensemble.

The Lawson Ensemble, led by Associate Professor of Cello Dr. Nick Curry along with Aurica Duca and Clinton Dewing of the Jacksonville Symphony Orchestra, overtook the Recital Hall at the Fine Arts Center for an intimate, powerful performance of chamber music. Yukino Miyake, a music certificate student in piano, also joined the trio for a performance spanning nearly a century of classical and romantic era music.

Before beginning the performance with Haydn’s Trio in G Major, a lively piece with a Hungarian-style third movement, Dr. Curry took time to address the crowd, which nearly filled the hall.

“We have fun playing because we have audiences like you,” he said.

That audience, mostly older adults but interspersed with students and classical fans of many different ages and appearances, were attentive and polite throughout. Applause came only after the group finished every movement of each piece, and not a single phone could be seen.

The players followed the light, cheerful Haydn with Mendelssohn’s Piano Trio No. 1 in D Minor, a more expressive piece with a brooding, dramatic first movement that instantly created a sharp contrast with the previous one in both volume and tone. The piece’s difficulty, technicality and the dizzying amount of notes became clear during the energetic, rhythmic latter movements, and the performers were first to admit it.

All three members of the ensemble are lifelong musicians with prestigious backgrounds. Dr. Curry holds a PhD in music from Northwestern University. According to the event’s program, Dewing attended Juilliard, and Duca, a native of Moldova, studied at conservatories in Italy and Germany. The two are also married.

Although Dr. Curry, as the only UNF faculty member in the group, is listed first in the event’s program, no single member of the group led the others or stole the spotlight. Instead, they worked as one unit, complementing and elevating each other until any flaws became impossible to hear.

During the final piece, Brahms’ Piano Quartet in G Minor, their brows furrowed and their body language became broad and forceful as their focus on the music intensified.

“I was amazed,” said Gloria Short, an elderly spectator who seemed particularly enthralled. “Their faces, their movements…I’ve been to many, many musical events, but I’ve never enjoyed anything more than this.”

Among the students in the crowd, the main reason for coming out was simply because of a love of music. Nicole Llinas, a junior in biology who’s seen the ensemble before, said listening to lots of string music brought her back.

“My favorite thing about UNF is how many concerts there are,” she said.

Some music majors, such as guitarist and junior Michael Havens, came to enjoy a different side of music than they’re accustomed to.

“Being a jazz major, it’s nice to get a contrast,” he said.

Others came for more practical reasons.

While reception for the ensemble was overwhelmingly positive, the musicians themselves turned out to be their biggest critics.

“It was a big program and we made a few mistakes,” said Dr. Curry after the show, “but we feel very good about the way the concert was received and we definitely enjoyed the experience of performing the music together.”

Indeed, there seems to be a certain strain of perfectionism in these world-class musicians. Perhaps that pursuit is what makes them so attuned to one another.

“We always strive to be better, but that’s how we’ve always been,” Dewing said in the midst of signing autographs.