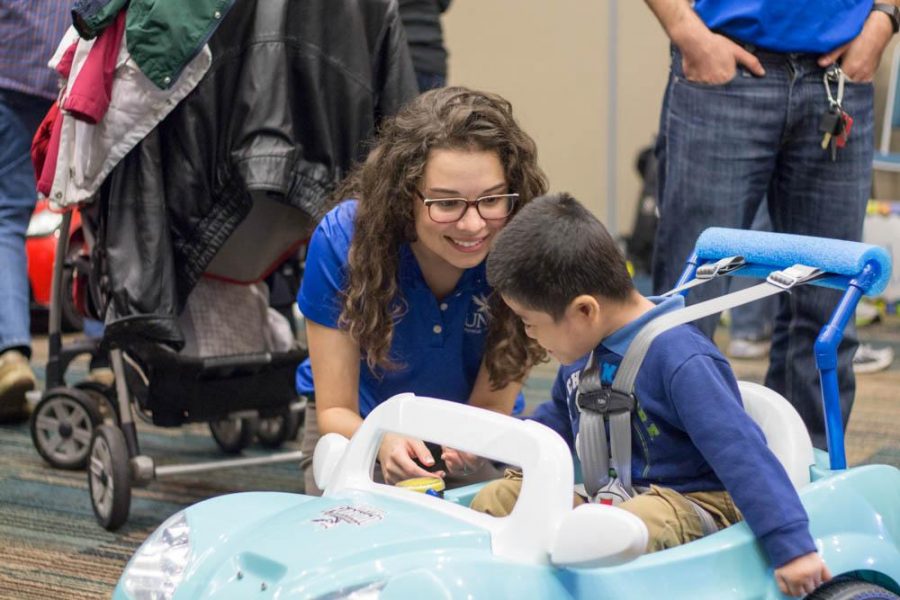 The adaptive toys were custom fit to the users, most toys have extensive modifications done to them. Photo by Michael Herrera

Video by Michael HerreraCheers erupted in the Student Union on Friday, as children with disabilities learned to operate their newly adapted toy cars while community members and students watched on.

In a room packed with students and their teams, the celebration overflowed out the doors so the new drivers could help them learn to maneuver the modified toys without so many obstacles.

For the second year in a row, UNF engineering and physical therapy students have worked together to serve a need in the community: providing adaptive toys to children with disabilities.

Students participating in the UNF Adaptive Toy Project worked throughout the semester to understand what each child needed, and to meet those needs by altering a toy car. By removing a steering wheel and adding a joystick, padding around the seat, or including a Bluetooth speaker, engineering students were able to make toys accessible for children who otherwise couldn’t play.

“When we were kids we had the opportunity for self-directed play,” Tillman said. “We went where we wanted to, we crawled wherever we did, and we played with the toys we wanted to play with. But a lot of times with kids with disabilities, they don’t have the opportunity to pick and choose and go where they want to go.”

Most of Maddex’s movement is in his left hand, so Busch and her team of engineering and physical therapy students took his Spiderman-themed car and added a joystick on one side so Maddex can easily maneuver the vehicle.

Knowing that he is very interested in music and also can’t see well, the students also put a sensor on the car that would stop it if it was going to run into something. The car plays music when it’s going and turns the music off when there’s something in front of the car, giving Maddex information about what’s in front of him.

“I think it’s awesome that he is now going to have the ability to maneuver his own environment,” April Hart, Maddex’s mother said. “I can’t give enough thanks.”

Students were pleased to be able to take a class that allowed them to help the community.

“It was a really great way to be a part of the community, and actually help the community and get that hands on experience,” Busch said.

This was the first year that students were able to present the children and families with their toy cars.

Tillman said everyone smiled from ear to ear while they watched Maddex learn to use his toy.

“He’s operating that joystick like a champ,” Tillman said. “I think once he gets into an environment where he can actually kinda hear the music and get more of that sensory feedback without all the people around he’s going to do even better.”

This semester, teams of students worked on cars for nine local children. When those children grow out of the toys, the UNF Adaptive Toy Project is asking that the families return the toys so they can be made available for other children in the community with disabilities.