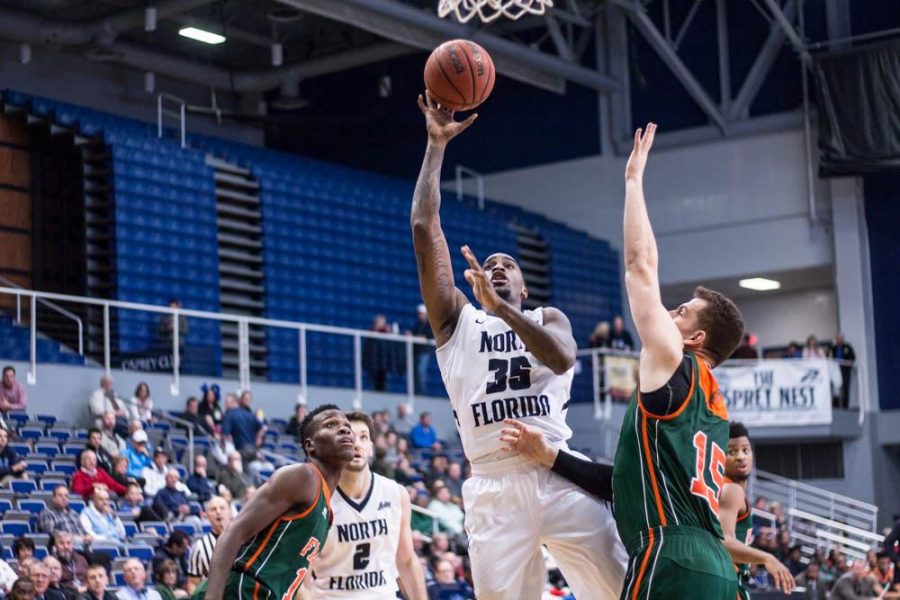 Racking up 18 points this game, junior forward Chris Davenport was the second-highest scoring Osprey of the evening. Photo by Michael Herrera

Video by Michael HerreraMen’s basketball (10-4) sealed an 87-70 victory behind late free throws in a physical matchup against the Florida A&M Rattlers (4-8) at the UNF Arena on Dec. 19. Throughout the first half, the Rattlers went to the free-throw line 19 times.

Technical fouls would be assessed to forward Beau Beech and later UNF Men’s Basketball Head Coach Driscoll in the middle of the first half.

Coach Driscoll said the Ospreys were a bit more aggressive than usual.

Guard Trent Mackey hit back-to-back three pointers late in the half to keep up the Osprey lead. As the clock expired before the half, guard Dallas Moore connected from behind the arc to send the Ospreys to the locker room with a 46-26 lead. Moore led all scorers with 25 points, and tied team-highs with seven rebounds and six assists.

Chris Davenport opened the second half with a three-pointer, and went 3-3 from behind the arc for the game. UNF drained 12 shots from downtown for the game and the Rattlers made seven of their own, knocking down six in the second half.

Similar to the Rattlers in the first half, the Ospreys went to the free-throw line often in the second half, taking 12 shots at the line. Late in the half, Beech hit all four free-throws on consecutive plays to pad the Ospreys’ cushion over the Rattlers.

“Outside shot wasn’t falling and you know guys just got me the ball in positions where I had a chance to drive,’ Beech said. “The reason we were getting heavy opportunities offensively was because we got defensive stops those possessions.”

Next the Ospreys face the Arkansas Razorbacks in the Bud Walton Arena in Fayetteville, Arkansas on Dec. 22. The game will mark the first of a four-game road-trip.