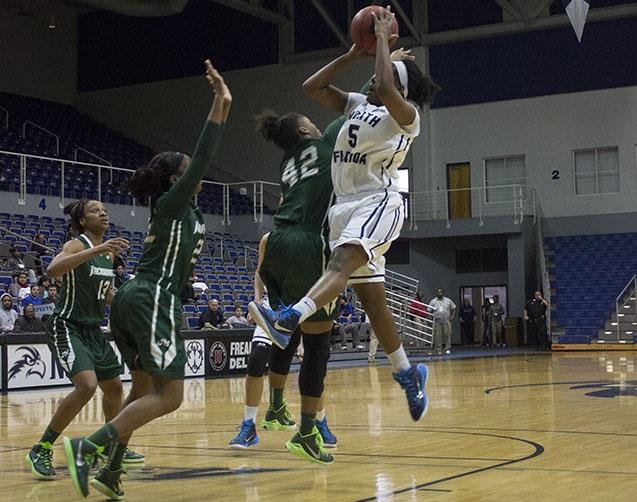 The UNF women’s basketball team (4-12 overall, 0-1 A-Sun) lost at home against arch rival Jacksonville University (9-7 overall, 1-0 A-Sun) by a score of 73-39 on Jan. 9. The loss marked five in a row for the Ospreys, their second five-game skid this season.

It’s been a rough year for the Ospreys. UNF has suffered brutal losses against big schools, but early in the game the tough schedule seemed to have prepared the Ospreys well for their conference schedule.

The Ospreys took an early command of the game despite a challenging full court press by the Dolphins. Scoring surges from junior guards Claire Ioannidis and Taru Madekivi lifted UNF to a 21-11 lead in the first quarter.

Ioannidis finished the game with 14 points but no other Osprey scored more than 6 points.

For the rest of the first half, it seemed as though a completely different team took the court. The Dolphins outscored UNF 21-4 in the second quarter to come back and take a 32-25 lead going into halftime.

Things went from bad to worse in the second half as JU managed to shut down UNF’s scoring again. The Dolphins outscored the Ospreys 18-4 in the third quarter to tighten their grip on the game to a 50-29 strangle hold.

One of the key battles that helped decide this game was that JU dominated in the paint, rebounds, and bench points. At the end of the game the Dolphins outscored the Ospreys 40-12 in the paint and their rebound margin was 46-26.

Jacksonville closed out the game 73-39. The Dolphins have defeated the Ospreys in 6 straight meetings.