Wozniak: The unsung hero, the other half of the Apple pioneers, and self-proclaimed prankster 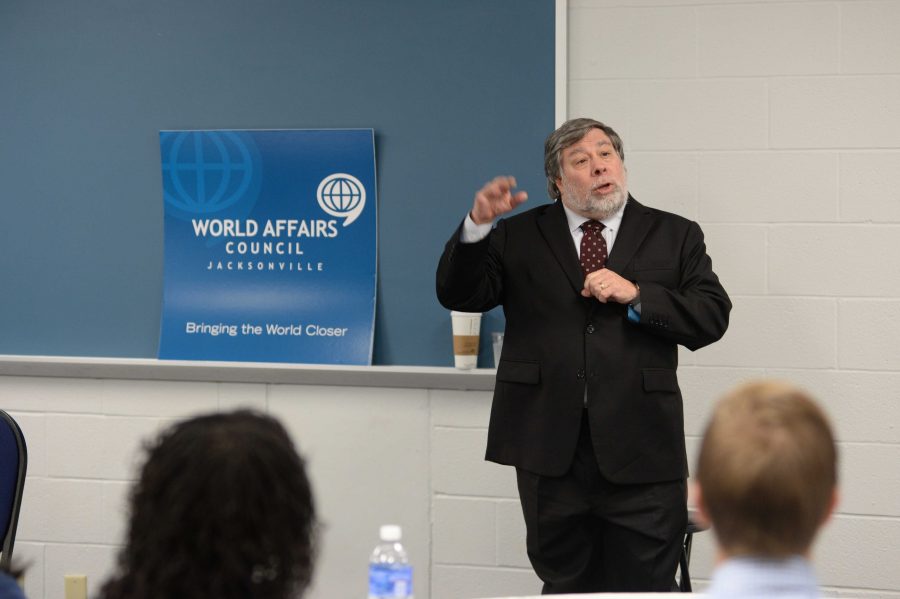 Wozniak speaking to a World Affairs Council group before the lecture. Photo by Jennifer Grissom

Steve Wozniak is not what you would expect from a man who changed the computing industry. He’s not a businessman. He considers himself an engineer, and a happy one at that.

He’s the kind of guy who can pull off wearing sneakers with a suit as well as making a joke about UNF standing for “U Never Finish” to university’s own president, John Delaney.

He did all these things while sitting down with Delaney Tuesday night in a sold-out UNF Arena for the Presidential Lecture Series event. During the event,  Delaney asked Wozniak questions about his various engineering jobs, his partnership with Steve Jobs, and his perspective on life.

“Being a good, giving, caring person is more important to me than being a technologist,” Wozniak said.

Wozniak was passionate about computers at childhood, and started building computer at a young age. He would often share his computer designs with his friends at school until his high school friend Steve Jobs kept the designs as a way to turn a profit. This was when the two were in talks of founding of a business that would be one of the most influential ones in the computer industry.

When Wozniak first got started with Apple, he was shy and didn’t like talking to people. He said he had two social behaviors: playing pranks and designing things that people couldn’t believe were real.

Over time, he racked up many awards in his computing career, including the National Medal of Technology, presented by President Ronald Reagan in 1985 for his achievements at Apple.

After leaving Apple, Wozniak stayed active in the community and pursued philanthropic projects. He primarily focused on computer capabilities in schools as a way to encourage creativity in his students.

And as Wozniak gained more success, he became less shy and very social. He said he’s never had an enemy and he’s friends with everyone. That’s all thanks to his happiness formula: H=(F^3+s)-f. In common terms: happiness equals F to the third (food, friends, fun) plus smiles, minus frowns.

According to Wozniak, “Happiness is a choice and the only person you have to convince is yourself.”

The atmosphere around the arena post-lecture was that of admiration and awe.

The crowd that attended Wozniak’s lecture was the biggest crowd they’ve ever had, according to David M. Strickland, Chairman of the Board of the World Affairs Council of Jacksonville.

Michael Korn, a member of the World Affairs Council, who co-sponsored the event, attended the lecture because he was “interested in hearing Wozniak speak about how to be a pioneer in a field he loved.”

Although Wozniak has grown very successful, he still seems to have that personal touch and presented himself as an authentic individual who’s trying to make life a little easier for us, one computer at a computer.