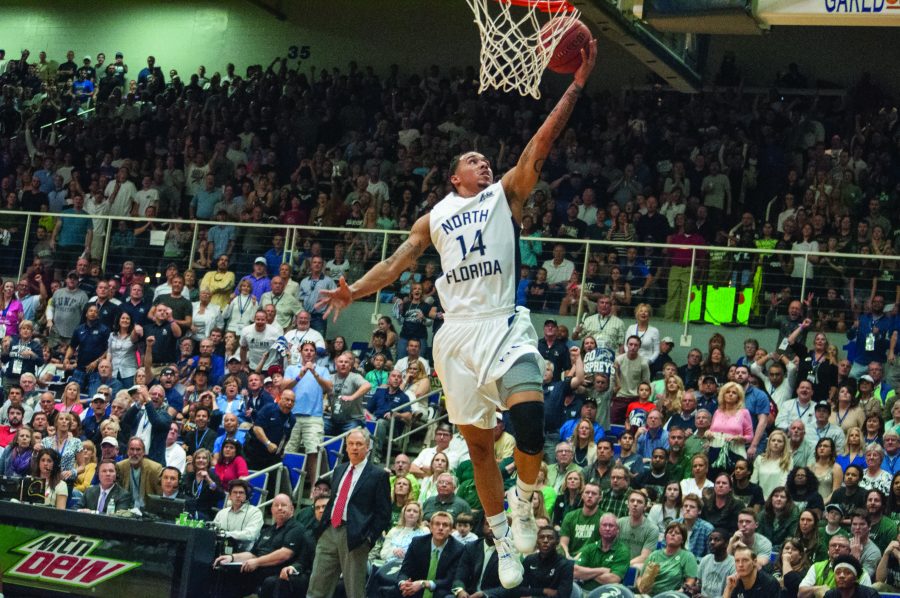 Dallas Moore will lead the charge against the Spartans in A-Sun Quarterfinal. Photo by Morgan Purvis

The Ospreys are entering the Atlantic Sun Tournament as the number one seed for the second consecutive year, and their opening game will be a rematch against the team they beat in the championship last season.

The Ospreys will face the USC Upstate Spartans for the third time this year, after emerging victorious in both prior meetings. The eighth-seeded Spartans will be looking for revenge after the Ospreys ended their season in the A-Sun championship game last year and earned themselves a trip to the NCAA March Tournament for the first time in program history.

The Ospreys averaged 10 more points per game than the Spartans this year thanks to excellent shooting. Six players made a shot from behind the arch in both of the previous meetings with Upstate, and the Ospreys have made more three pointers this season than any other team in the nation. Beau Beech and Trent Mackey are the two most dangerous shooters for UNF, and both are top 10 in the nation for threes made. If the “Birds of Trey” get hot it will be difficult for any A-Sun team to keep pace.

Upstate will run most of their offense through 6-foot-11-inch center Michael Buchanan. Buchanan scored 31 points in the first meeting and finished with 20 points, 11 rebounds and a double-double in the second. The Spartans have been plagued by turnovers all year, averaging 14 per game and committing 12 in both previous match ups. The Spartan offense is not strong enough to give up easy, fast-break points off turnovers.

The Ospreys lost 6-foot-11-inch center Romello Banks early in the season, creating a lack of size in the frontcourt. Banks was the best rim protecting shot blocker on the team, and opponents have found success in the paint with his absence. Demarcus Daniels is the reigning A-Sun Defensive Player of the Year, and led the team with 71 blocks.

The Ospreys have four players with over 1,000 career points and six of the seven main contributors are juniors or seniors with tournament experience. Both Dallas Moore and Beau Beech have broken Koran Godwin’s program record for career points (1,513).

Upstate consistently starts two freshman in their starting five, along with two juniors and one senior.

The key match up to watch will be reigning A-Sun defensive player of the year Demarcus Daniels and 6-foot-8-inch forward Chris Davenport against Michael Buchanan. If they can limit Buchanan, they will take away a key component of the Spartan offense and disrupt their offensive game plan.

The Ospreys’ offensive firepower will be too much for the Spartans to handle.