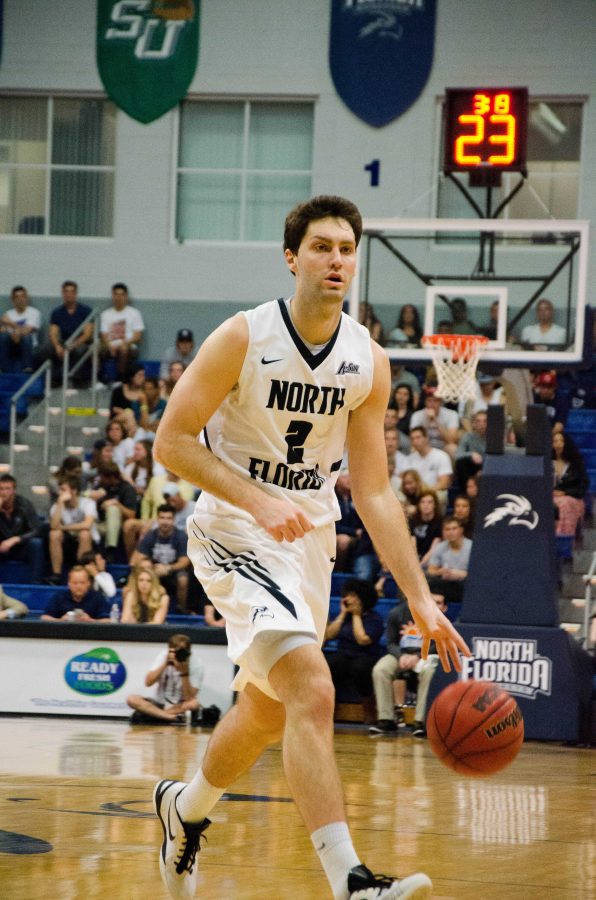 The North Florida Ospreys will host the fourth-seeded Florida Gulf Coast Eagles in the Atlantic Sun Tournament Semifinal Thursday at the UNF Arena.

The Ospreys have faced the Eagles twice this season, splitting the series. UNF won the first home match-up 82-76, but lost the away rematch 65-81.

The Ospreys are averaging 9.2 more points per game this year than the Eagles, thanks to A-Sun player of the year Dallas Moore and A-Sun First Team All-Conference selection Beau Beech. Moore leads the team averaging 19.8 points per game, followed by Beech who averages 15.6. Trent Mackey went 5-6 from three in the Quarterfinal game against Upstate, and is nine threes away from the school record of 116 set by Parker Smith.

Gulf Coast’s offense is led by First Team All-Conference forward Marc-Eddy Norelia, who averages 17 points a game and scored 38 in the teams previous two meetings. FGCU guard Christian Terrell scored 15 points and went 3-3 from downtown in the Quarterfinal game against Kennesaw State. Six Eagles scored over 10 points, and the team shot 50 percent from the field to beat the Ospreys in the second match-up.

The Ospreys gave up 104 points in the paint to the Eagles in the two previous meetings, highlighting their lack of size inside. Forward Demarcus Daniels is the second-ever A-Sun back-to-back Defensive Player of the Year, and he leads the Ospreys with 71 blocks this season. The Ospreys have allowed teams to shoot 45.9 percent from the field this season, which ranks sixth in the A-Sun. The Eagles reeled in 17 more rebounds than the Ospreys in the previous two match-ups.

FGCU allows opponents to shoot 41.8 percent from the field this season, which ranks first in the A-Sun. In the Eagle’s previous victory over UNF, the team scored 10 points off eight turnovers, compared to the Osprey’s zero points from four turnovers. Gulf Coast also held the Ospreys to 28.6 percent shooting from three and 35 percent from the field.

The Ospreys have four players with over 1,000 career points, and five of the seven main contributors played significant minutes in the A-Sun Semifinal against Lipscomb last year. The Ospreys play three seniors, three juniors and one sophomore, and have started the same five players every game this year.

FGCU has started 10 different players throughout the year, and eight average over 15 minutes a game. One senior, one junior, one sophomore and two freshmen get the most playing time for the Eagles. Filip Cvjeticanin is the only remaining Eagle from the 2013 team that went to the Sweet Sixteen.

Beau Beech and Marc-Eddy Norelia are the two A-Sun First Team All-Conference forwards, and they will likely be pitted against each other Thursday night. Beech averages two points and three rebounds less than Norelia, but Beech has hit 93 three pointers compared to Norelia’s zero. Norelia has produced more consistently throughout the season, but Beech has the ability to light up the scoreboard on any given night.

This game is a toss-up, which will come down to UNF’s ability to make shots. Home court advantage has propelled the Ospreys to a 14-1 record at UNF Arena, and it will be the reason UNF wins Thursday.