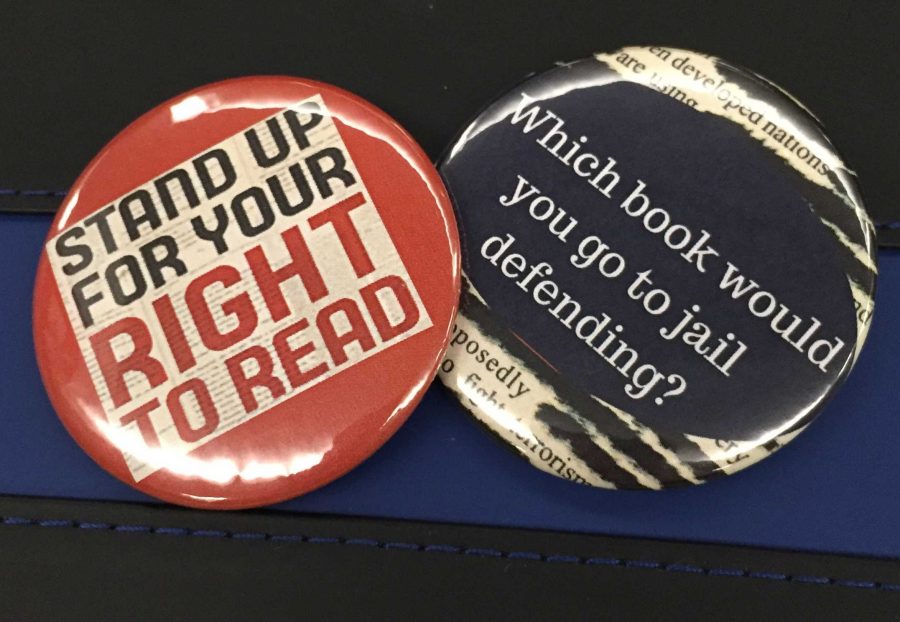 The library is handing out buttons supporting individuals right to read. Photo by Hannah Lee

The Thomas G. Carpenter Library is celebrating banned books throughout the month of September and recognizing the 1st Amendment. This is the second year that the library will host events in honor of Banned Book week, including a Readaloud, blackout poetry and a Banned Book Bracket.

Banned Books week is a national event recognizing the 1st Amendment by celebrating the freedom to read. Each year, the American Library Association puts together a list that describes which books were challenged and banned in public, collegiate, academic, and school libraries. It became a national event in 1982.

In 2015, 275 books were challenged because they contained homosexuality, offensive language, violence, religion, and/or for being sexually explicit.

The Banned Book Bracket kicked the month off at the library. Students voted for which modern banned books and which classic banned books they love best. Students who previously submitted their “book bracket” are eligible to win a Banned Books prize. The winner will be announced on Sept. 29. Students can vote on their favorite banned books here until Sept. 28.

On Tuesday, Sept. 27 the library will be hosting a panel discussion with Tom Caswell and two other faculty members. Elizabeth Curry, Library Dean, said that the panel will be “a discussion about banned books. A discussion really about the freedom to read and the commitment to that freedom.”

Stephanie Race, Head of Research & Outreach for the Thomas G. Carpenter Library, is in charge of the different programming going on this month for the event. She organized the panel.

Other events that are going on are the Banned Books Week Readaloud on Thursday, Sept. 29, and Blackout Poetry from Sept. 26 through Sept. 30. The Readaloud is open for anyone from the University (faculty, staff, and students) or outside the university to come and read from their favorite banned or challenged book.

The library also plans on posting a list on their webpage that lists all the banned books that have been made into movies for those students who don’t have time to read.

“Then come and listen,” Curry suggests for students who don’t want to read. “Be part of the audience to hear other people read.”

The library started this event in order to encourage reading.

Banned Books week will be from Sept. 25 through Oct. 1. More information about Banned Book Week and the events that the library is hosting can be found here.