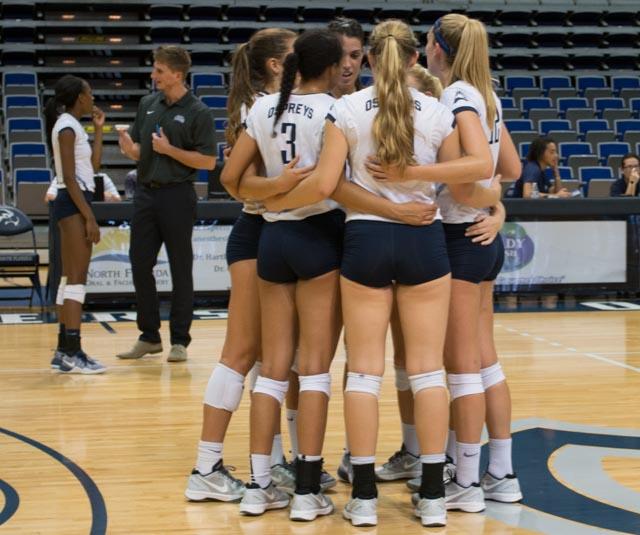 The volleyball team won in five sets over Florida A&M after losing a two-set lead on Tuesday night at the UNF Arena.

The first set was evenly matched. Both teams were fighting for dominance, with there being five tied scores and three lead changes. There were many long rallies and big hits by both sides. The Ospreys had 15 kills to the Rattlers’ 13. UNF was able to pull away, and won the first set 25-22.

With one set under their belt, UNF continued to dominate FAMU. The Ospreys jumped out to an early 6-1 lead, forcing the Rattlers to take an early timeout. FAMU began to substitute players in an effort to change the momentum. But they had no answers for the Ospreys’ 15 kills. UNF took the second set 25-16, and they went into halftime with a two set lead.

Out of the half, the Rattlers struck first and hard. UNF came out cold and warmed up near the end of the set, but it was too late. FAMU had 19 kills to UNF’s nine. The Ospreys fought off three set points, but came up short, losing the third set 25-20.

FAMU had high energy going into the fourth set. The Ospreys played well, but FAMU was able to find holes on the court. The Rattlers had 15 kills.

There were many long rallies, but the Ospreys could not close out the set. A service error gave FAMU their first set point, and a double hit gave the Rattlers the set with a 25-17 win to even the sets 2-2.

“We didn’t have our best games in sets three and four,” Loeswick said. “We became a little unsure of ourselves. We needed to clean up our side of the net.”

Junior setter Carinne Turner had a great game with team-high 16 kills in addition to 3 assist, and 15 digs, which Loeswick noticed.

“Carinne has done an amazing job for us,” he said. “We’re asking her to fill a role [position] that she hasn’t done in years. I don’t think that I could ask her to do a better job.”

Turner spoke about how they were able to pull out this win.

“We stayed offensive, we stayed as a team and played together and we came out and beat them,” Turner said, going on to define the team’s goal for this season.

“We’re going to win conference, go to the NCAA tournament and hopefully win all the games at home,” Turner said.

With this win, the ladies recovered from back-to-back losses against Georgia Tech and Coastal Carolina on the road in the Chanticleer Classic.

The Ospreys will travel cross town to face rival Jacksonville Dolphins on Sept.23 at the Historic Swisher Gym.

For more information or news tips, or if you see an error in this story or have any compliments or concerns, [email protected]