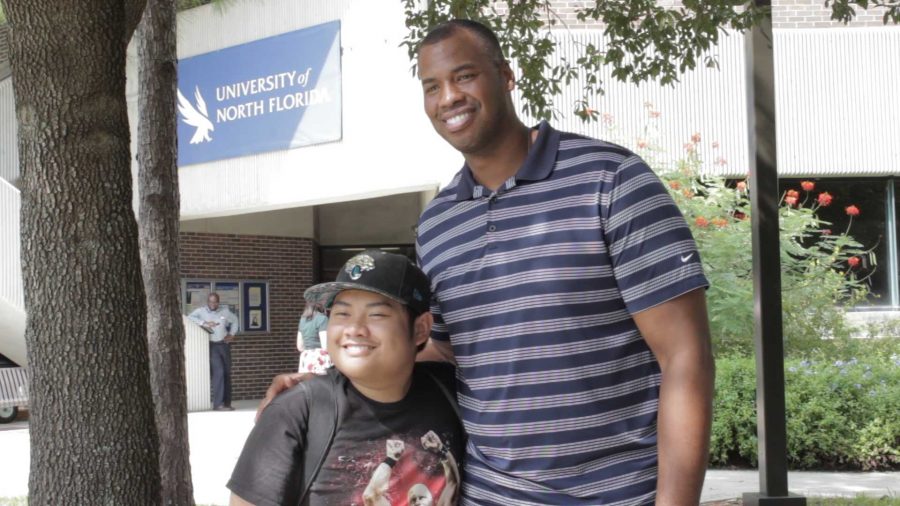 Former NBA player Jason Collins — the first openly gay athlete to play in a major American sports league — stood on the lip of the Green Sept. 29 to implore students to register to vote.

Collins came out in 2013 after ten NBA seasons. A year later, he was featured on the cover of Time Magazine’s 100 most influential people in the world. Collins became an activist following his NBA career.

“People have sacrificed so much and people have literally died so we have this right to vote, so we’ve got to exercise it,” Collins said. “My nieces and nephews are biracial. I want them to grow up in an America that’s all about equality, all about acceptance and inclusion.”

At UNF, Collins stressed the importance of voting as a civic duty. Collins’s enthusiasm for voting stems from an experience he had shortly after he was drafted in 2001.

“I show up on the day of the election ready to vote, and they say ‘No, we don’t have you,’” Collins said. “I actually had to go to an emergency hearing that day.”

“I remembered how excited I was to have the ability to take part in our political process and cast my vote,” Collins said.

“They all got to see somebody that represents them talking about voting, which is very important,” Moore said. “Getting that in-person celebrity effect can really motivate people to get out to vote.”

“He’s African-American and he’s gay. Those are two demographics in America that are either not seen or not represented well,” Durity said. “Him telling students to get out and get voting is very important. I think he had a great message.”

The deadline to register to vote is Oct. 11.