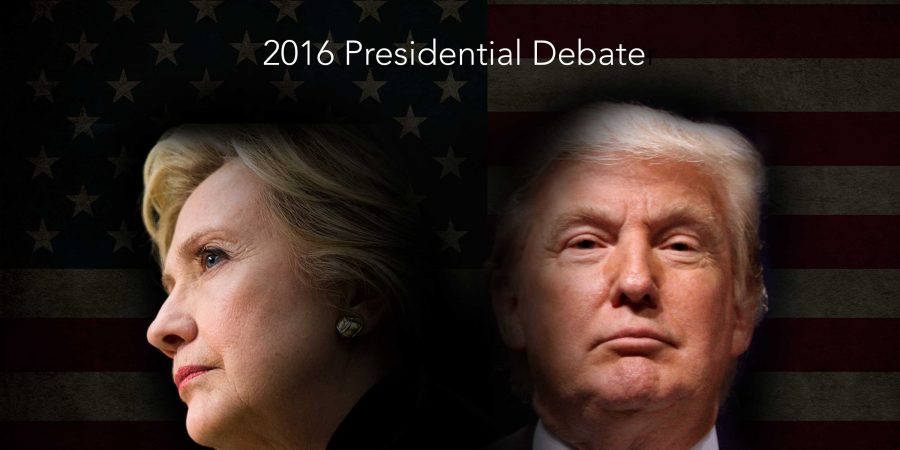 What was arguably the most tame presidential debate this election cycle also happened to be the last between Donald Trump and Hillary Clinton. With less than three weeks until election day, the candidates had a lot to say.

“I see no conflict between saving people’s lives and defending the 2nd amendment,” Clinton said, specifically on the right to bear arms.

“We are going to appoint justices that will help the second amendment,” Trump said on the other side of the stage.

Trump says his pick for Justices will uphold the constitution "the way it was meant to be."

The shift to discussions on abortion and ‘Roe v. Wade’ prompted very different answers from the candidates. Trump referenced appointing pro-life justices to the Supreme Court and criticized Clinton’s stance on late term abortions. Clinton cemented her stance by saying that she won’t infringe on a woman’s right to choose.

Immigration and border patrol have been cornerstones of the Trump campaign and continued to be tonight.

“We have no country if we have no border,” Trump said.

Clinton tried to separate herself from Trump while also retaining a firm stance on immigration.

“I don’t want to see the deportation force Donald has talked about in our country,” she said. “I have been for border security…but I want to put our resources where they are most needed.”

Trump then went on to say that “Hillary Clinton wanted the wall,” and “President Obama has deported millions and millions of people across the border.”

The first true outburst happened when the topic of Russia and more specifically, Vladimir Putin arose.

“I don’t know Putin, he’s said some nice things about me,” Trump said.

Clinton called out Russia and their interference with the election, saying that “Putin would rather have a puppet,” to which Trump responded, “You’re the puppet.”

This topic was probably the best chance for both candidates to make their case to still undecided millennials.

“People who work full time should not be in poverty,” Clinton said. She also discussed the college plan she has worked with Bernie Sanders on.

Clinton: "I will not add a penny to the debt." @UNFspinnaker

“During President Obama’s regime we’ve doubled our national debt,” he said. Trump repeatedly mentioned a stagnant U.S. economy and both candidates engaged in further discussion on the TPP and NAFTA trade agreements.

What was possibly both candidates best punch lines came during this topic.

“The one thing you have over me is experience, but it’s bad experience,” Trump said to Clinton. “You talk but don’t get anything done.” Clinton got her chance a minute or so later.

“When I was in the Situation Room…he was hosting the Celebrity Apprentice,” she said.

Fit to Be President

What started as another session of Trump dismissing sexual assault claims became an attack on the Clinton and Trump Foundations. Trump called the Clinton Foundation “a criminal enterprise,” to which Clinton responded with a question about Trump’s unreleased tax returns.

Clinton called out Trump for his gaming of the system.

“Your donors and special interests are doing the same thing I do but much worse…you should have changed the laws,” he replied, adding that, “She should never have been allowed to run for presidency.”

Crowd is getting slightly rowdy as the topic of foreign Hotspots hits center stage. #debatenight @UNFspinnaker

Clinton described her short and long term goals for establishing safe zones and no-fly zones in Syria before Trump criticized Clinton and the Obama administration for providing help to Syrian rebels.

“We are backing the rebels and we don’t know who they are,” Trump said.

Moderator Chris Wallace set the stage for a showing of distinction between the two candidates plan for addressing the economy before shifting to the topic of entitlements, something Wallace cited as causing 60 percent of the national debt.

“I’m going to create the kind of country we were from the standpoint of industry,” Trump said.

“We’ve got to get back to investing in the middle class,” Clinton said.

The wraps up the last presidential debate. @UNFspinnaker #debate

Closing Statements and What Stood Out

Both candidates took an unexpected minute to address the American people before the closure of the debate. Both Clinton and Trump stuck with their messages and ended addressing their supporters and undecided voters alike.

What stood out more than their closing statements was the demeanor of the debate. Trump was calmer than in the previous two debates and Clinton spoke on specific parts of her foreign policy and economic plans in ways she hadn’t before.

Trump and Clinton arguably had their best individual debate performances tonight, and we’ll see how their showings impacted polls and and the overall election in the coming weeks.