Students waiting in line respond to Obama on campus 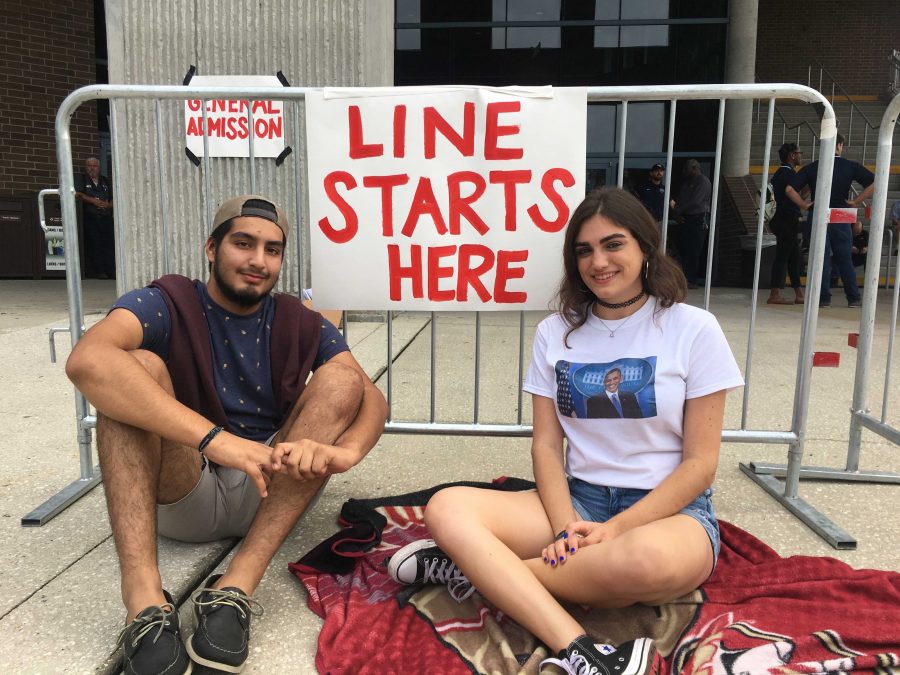 Sophomores Alexis Kmieck and Albaro Barrios got in line at 1 a.m. so they could be the first ones in. Photo by Tiffany Butler

Students and Jacksonville community members have been lined up in anticipation for the rally lead by President Barack Obama all day, and the line now wraps all the way from the Arena to Eco Road. The first people in the general admission line are two students, who told Spinnaker they had been in line since 1 a.m.

“I wanted to be the first one in line. I’m a huge fan of President Barack Obama, and I didn’t want  anyone to be in front of me,” said sophomore political science major Alexis Kmieck.

She continued to say the candidates are so opposite of each other, that it’s really important for young people to come out and vote.

“This is our future, and this is what we have — the ability to control our future. Things are either going to go one way or the other and it’s up to us to push for whichever one we want to go with,” she said.

Kmieck was accompanied by sophomore marketing student Albaro Barrios, who said it’s such a big election, that young people need to participate and come out and show support for their candidates.

“You’ve got to pick the lesser of two evils, and obviously, I can’t pick Donald Trump,” Barrios said.

Senior civil engineering student Lexi Kimes and her family got in line at 7 a.m., which she said has already been such a cool experience. Her mother, Brig Kimes, is a UNF alumni who said she missed an administration meeting at the school she teaches at to be here. “I don’t get too many educational opportunities with my adult children, so this is a big opportunity and I didn’t want to miss it,” she said.

“It’s important to understand and appreciate the political process and democracy,” said father Sam Kimes. Different members of this group valued different issues that have been prominent in the election, and also had their own reservations about both candidates.

“I have my concerns about her [Hillary Clinton], but I still support her,” he said.

Despite the extensive line of people waiting to get into the Arena, some students on campus aren’t so eager to see the president.

Public Health senior Cassidy Neer said she has class during the time of the rally, but the line is so long she probably wouldn’t have wanted to go anyway.

“I’m just really not that interested in this whole election,” Neer said. “I just feel like both sides are so back and forth right now that it’s just a mess to be involved.”

When Neer heard that the sitting president of the United States was coming to campus, though, she was excited.

Biology major Tim M. also said he has class, but wouldn’t have wanted to go to the rally either.

“Just because it’s not a guaranteed spot and the line’s already crazy long,” he said.

Despite the lines, even students who don’t support Hillary Clinton are lining up to see the president, saying that they’re just excited to see Obama on our campus.

“This is one of the worst elections in American history and for a lot of us, this is the first time that we get to vote,” she said. “A lot of people are just so troubled by both candidates.”