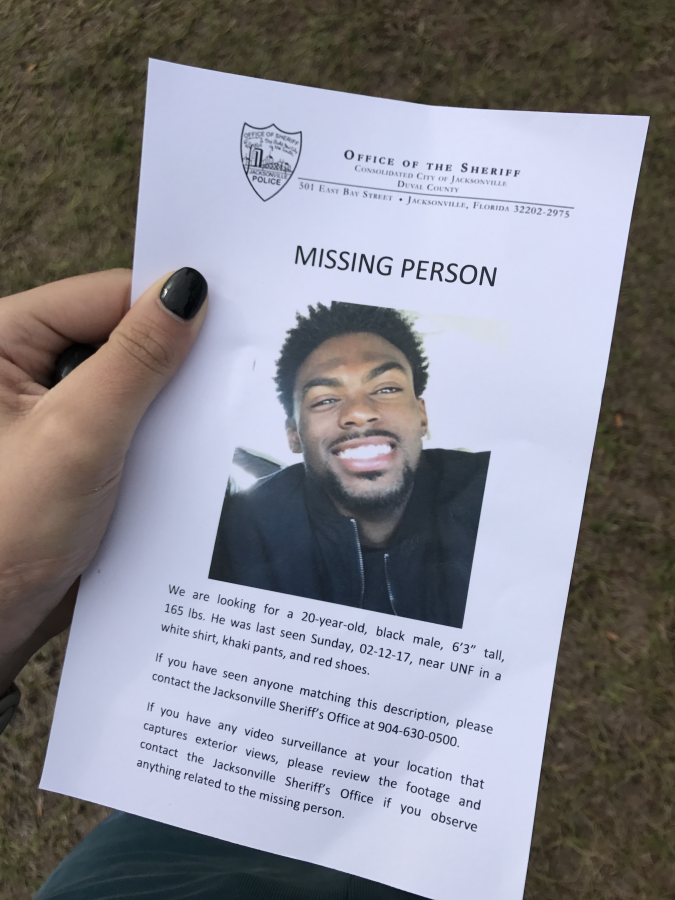 The flyers being handed out to residents of The Flats and surrounding neighborhoods. Photo by Tiffany Salameh

The search was called off due to inclimate weather shortly after noon today. The search will continue tomorrow.

Police handed out around 2,000 flyers to residents of The Flats and surrounding neighborhoods on Kernan Boulevard asking for any external surveillance video that could aid them in their search for Louissaint.

“We’re asking everybody for information, not just students,” Mackesy said. ”We just walked several neighborhoods on Kernan Boulevard that have nothing to do with students from basically JTB all the way to Beach Boulevard.”

Mackesy said that they did receive some video surveillance and it is currently still under investigation. An image was captured off of one of the security images, but the parents said that the person in the image was not George.

At this point, UNFPD and JSO are following up on numerous investigative leads but the “visible component” of the search is ramping down, meaning that search teams will likely not be active around campus in the following days.

“Just because you can’t see it doesn’t mean there’s nothing happening,” Mackesy said. “As we’ve been doing this we’ve been running a parallel investigation. We’ve shaken down every lead, every possible angle that we can think of that relates to the disappearance of George Louissaint, Jr.”

Mackesy also said that some tips have been received but was unable to comment on what those tips were.

“We are not giving up our search. We’re still looking for anyone out there who has any information on the whereabouts of George Louissaint, Jr.”

Since Sunday, 27 lakes and 13 square miles of forested area around UNF and The Flats have been searched. The search will continue today if weather permits, but if lightning and high winds become a factor, the search will be called off for the day and continued tomorrow.

“I would be less than truthful with you if I told you that I think this guy just walked away and doesn’t want to be found,” Mackesy said. “That is what I want to see happen and then I want him to say ‘Uh oh my poor mama is in there bawling her eyes out right now, I need to call.’”

Mackesy said that he believes somebody out there knows something about the whereabouts of George Louissaint, Jr. and continues to encourage anyone with information to contact UNFPD at (904) 620-2800 or JSO at (904) 630-0500. He wants anyone with any information to know that he does not want to get anyone in trouble, he just wants to find George.

“If you met the family, you would want to help us help them.”