Body of missing UNF student found in pond near the District 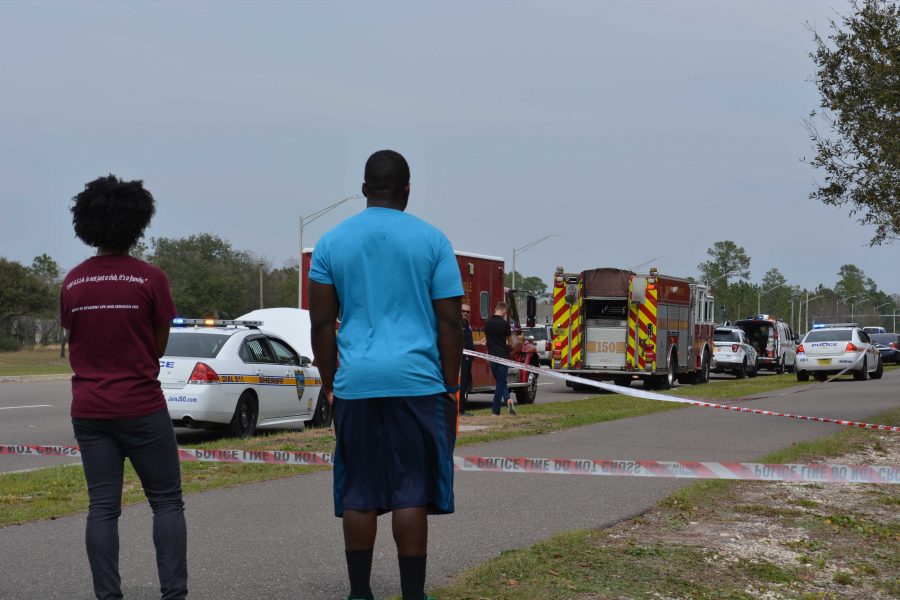 Friends of Louissaint's watch as police investigate the scene. Photo by Julianne Brugger

Authorities found the body of missing UNF student George Louissaint, Jr. in a pond by the District on Kernan on Saturday morning, concluding a nearly week-long search.

At 9:41 a.m., a person walking a dog “saw something unusual floating in the pond,” JSO Director of Investigations and Homeland Security Ron Lendvay said. “That discovery was a partially submerged body of a young adult black male.”

Authorities later confirmed the body was Louissaint, and the JSO Dive Team recovered the body.

While police do not know the cause of death yet, they no have reason to suspect foul play.

“Any death investigation is going to get looked at like a homicide until something’s proven different,” Lendvay said. “At this point there is no indication of foul play in the investigation.”

According to the missing persons report from UNFPD, Louissaint told his sister “I love you… I love you, I am going to end it tonight,” just minutes before he went missing the morning of Feb. 12. Earlier that morning, he told his roommate, “you might not see me tomorrow.”

Police searched 14 square miles of land and 27 retention ponds for signs of Louissaint, and passed out thousands of flyers asking people to come forward with information or surveillance video that could help investigators. The search was called off Thursday after exhausting all leads.

One of the 27 ponds police searched was the one where Louissaint’s body was found today, near the District on Kernan, where he lived. Police used side scan sonar during the week, but didn’t find anything at the time.

“There are some unique environmental conditions related to this pond that could create false positives or false negatives,” Lendvay said.

It appeared that the body had been in the water for “quite some time,” Lendvay said. “It could be since the time he’s been missing.”

Mackesy recognized that this is a difficult time for the UNF community.

“My heart breaks for [the students]. I’m sorry they have to go through this,” Mackesy said. “But if there is one thing that makes UNF different, it’s the way we rally together in times like this.”

Mackesy encouraged students to take advantage of grief counselors and victim advocates available in the Student Union shortly after Louissaint was found. Counselors are available in Building 58E Room 1100 for students and faculty today.

Members of the campus community who are experiencing distress and need someone to talk with later this weekend can call the UNF Counseling Center’s main number, (904) 620-2602. When the voicemail starts, press 2 to be connected to a licensed therapist. Community members can also call (904) 620-1010.