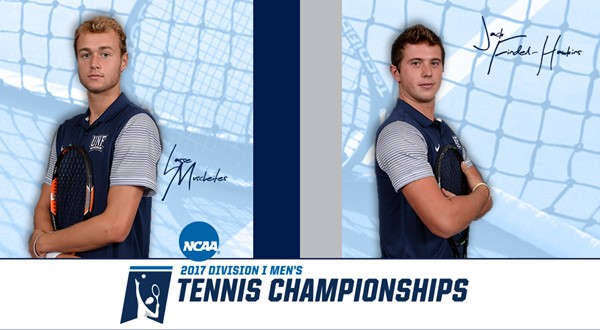 After an epic run in the NCAA tournament, senior Jack Findel-Hawkins’ career has come to an end in doubles and singles play.

In Athens, Ga., tournament play continued as Findel-Hawkins and doubles partner junior Lasse Muscheites prepared to battle in the doubles match on May 26.

The two Ospreys faced the No. 1 duo in the nation Robert Loeb and Jan Zielinski of UGA.

After trying to keep the score tight in the first set, the Ospreys fell through the cracks and were defeated 7-5, 6-4.

“It was a disappointing result today. We had our chances, but were not able to execute,” said head coach Mark Finnegan.

“I am really proud of Lasse and Jack for a phenomenal year in doubles. I know Lasse is going to try to come back and become an All-American next year,” said Finnegan.

Findel-Hawkins would have another chance to continue in the tournament as he had to play his singles match the next day.

After defeating No. 45 Borna Gojo of Wake Forest, Findel-Hawkins face No. 16 William Blumberg of UNC on May 27 in the NCAA Singles Quarterfinals.

Findel-Hawkins became the first men’s tennis player in the ASUN  to advance to the NCAA Singles Quarterfinals and win three matches in the tournament.

In the quarterfinals, Blumberg would defeat Findel-Hawkins  6-4, 6-4.

As the two-time ASUN Player of the Year, he finishes with 62 singles wins, landing him the fifth spot in the UNF record book in singles.

If you have any compliments or concerns regarding this article, please email [email protected]