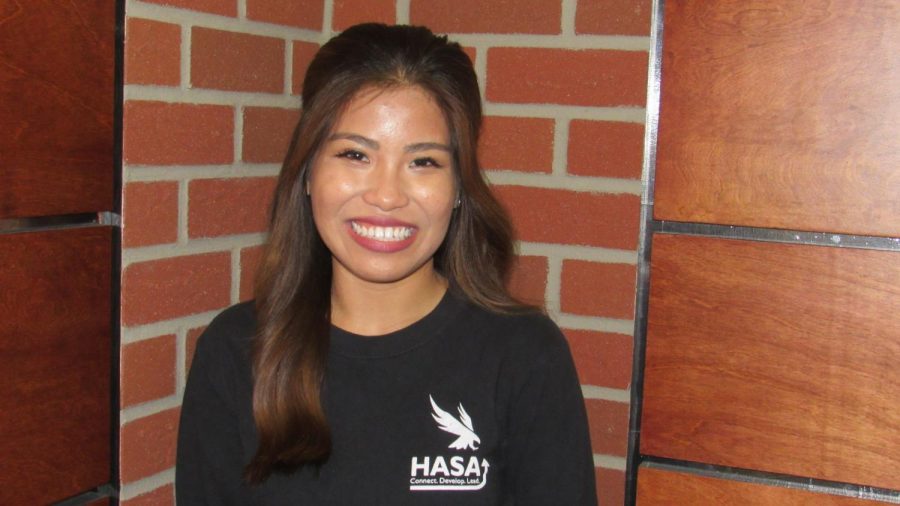 When the UNF Arena fills up for the 2017 summer commencements, one senior will have more than just her degree when she walks across the stage.

Angela Inciong, a health administration major, is the Senior Service award recipient for the summer class. The award, which is presented by the Alumni Association, is based on a deep commitment to the community and not on a set amount of hours put in like in high school.

The bubbly rising graduate’s dedication to volunteerism started by accident during the first semester of her senior year. Inciong enrolled in the Introduction into Leadership course taught by Dr. Matthew Ohlson as an elective, not knowing about the mentoring requirements.

Built into the class is the C.A.M.P. Osprey program where UNF students mentor younger kids in the community with leadership skills in addition to the course load.

But instead the class began to be less of an assignment to complete and more about the impact she could make in her last hurrah at UNF.

“What mattered was spending time with these girls and spending every week and just showing them that college is a great way to be able to make a difference,” Inciong said.

During the second half of the fall semester, Inciong was paired up with eight girls from the River City Science Academy, a group that could easily relate to her in one of the most unusual ways, her height.

“Actually most of them were taller than me. Two out of the eight girls were actually shorter than me or my height,” Inciong said.“So it kind of help with the bonding that we had and the relationship builder so that I could be able to really connect with them with the leadership stuff that we trying to teach them.”

She even had a few laughs with her students with each mentoring session.

“I could kind of joke around with them on that. Like you know, oh I remember being your age and I was still this height,” Inciong said.

Ohlson, assistant professor and director of C.A.M.P. Osprey, saw Inciong as an asset for program with both her mentees and her peers on campus.

“She was absolutely instrumental in the success of our program in one of our school sites in Jacksonville. Angela went above and beyond in terms of her leadership role,” Ohlson said.“ Not only serving as a mentor to students but she served as a lead mentor and really help to develop the leadership skills of her peers, among her UNF college student classmates.”

Inciong was not just involved in the C.A.M.P. Osprey program at UNF. She could be seen with the Women in Business Society as the marketing coordinator, and in the Health Science Administration Student Association.

For her, the doubts that run through most students’ minds such as do I have enough time, am I capable of doing this, or am I the right fit for it shouldn’t stop the thirst for volunteering.

“Grab a couple of your friends and find something that you are interested in and just go for it,” Inciong said.

Her passion for making a difference radiates from her glowing smile and infectious laugh that spreads to each person she meets.

“Even just a small gesture of getting someone coffee or saying thank you or just giving them a compliment really just turn your day around just like that,” Inciong said. “I think that is really important and really needed and I find in those small things it really brings me a lot of joy because you just see the impact that you make on their day.”

With the encouragement of Ohlson, she completed the leadership minor as one of the top students. He can see how Inciong was selected as the summer recipient based her initiative in the program.

“Without a doubt, she went above and beyond, even after she took our course and met her commitment with the program,” Ohlson said. “She would volunteer on her days off, she would come in after the program was over, she would spend extra days helping with programs initiatives that won’t even her responsibility.”

While she made have been the mentor for others, she learned an important lesson for herself that she won’t forget.

“I learned for me that the most important thing is to not look to the left or to the right because I can’t keep moving forward if I do that,“ Inciong said. “I found that I need to be an advocate for myself to be able to acknowledge the good things and learn from the bad things and to keep growing as a person.”