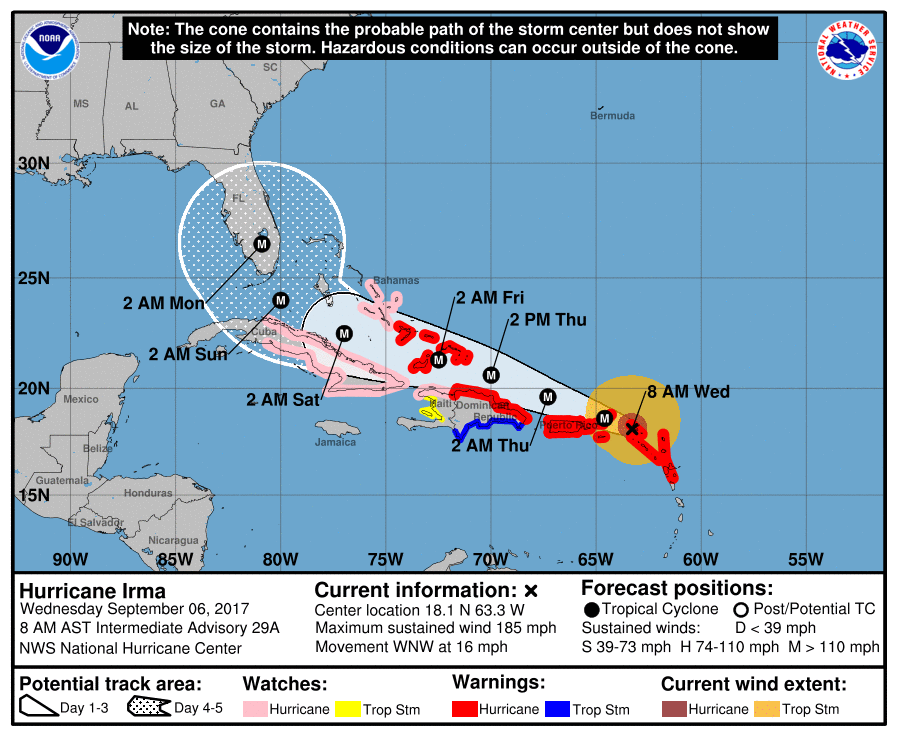 The 2 p.m. update from the National Hurricane Center puts Jacksonville in the projected path of Hurricane Irma. The First Coast should feel the effects of the storm midday Sunday and Monday.

The storm surge is predicted to be anywhere from 2-5 feet and 6-12 inches of rain is expected, according to the NHC.

Mayor Lenny Curry declared a State of Emergency will be in effect in Duval County at 3 p.m. Wednesday.

The 11 a.m. update from the National Hurricane Center shows an official change to the track of Hurricane Irma, with the storm shifting East up the Florida coast. The latest track shows Irma hitting Jacksonville Monday as a Category 3.

Hurricane Irma is expected to make landfall in Florida Sunday, according to the National Hurricane Center’s 8 a.m. update. The storm remains a Category 5 with maximum sustained winds of 185 mph — only six Atlantic hurricanes in history have been recorded with winds over 175 mph.

Florida Governor Rick Scott said in a statement this morning that the Florida Department of Education is working with colleges and universities and plans for school closures are underway.

“This storm has potential to devastate our state and we have to take this very seriously,” Scott said.

At this time, the University of North Florida has not made any decisions regarding university closures in light of the hurricane.

According to the forecast track, Irma made landfall in the Caribbeans early Wednesday morning and is heading for Florida over the weekend. Jacksonville is currently in the cone but predictions are premature and subject to change.

The storm is expected to maintain its intensity as a Category 4 or 5 through the weekend, the NHC said. South Florida will begin to feel the tropical force storm winds Friday, and Jacksonville Saturday night.

Scott is urging all Floridians to stock up on hurricane disaster supplies sooner rather than laters. He said if your local supermarket was empty yesterday, they will likely be replenished today. The state is also monitoring fuel levels, according to Scott, but he is encouraging everyone to fill up their tanks now.

“Be ready today, do not sit and wait prepare now,” Scott said.

Evacuations for Florida counties will be announced accordingly. If students on campus don’t have a place to evacuate, UNF has a plan. For more information on Jacksonville’s evacuation zones, visit here.

“Take what you need to evacuate, don’t take extra.”