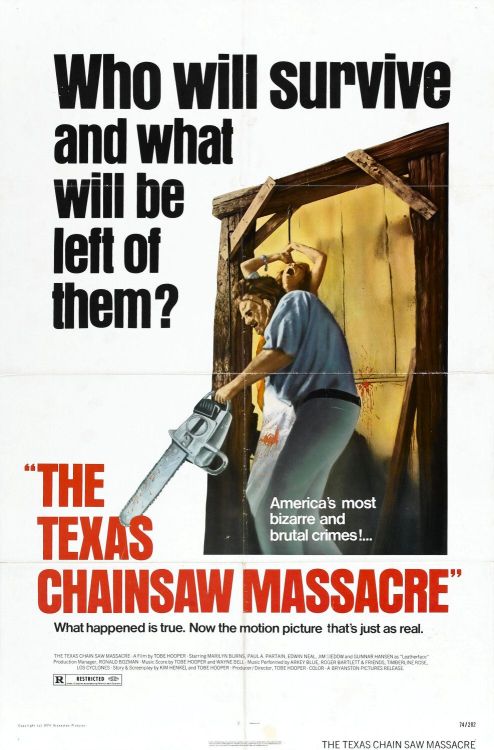 Tobe Hooper’s 1974 film, Texas Chainsaw Massacre, is a gritty and gory piece of horror that pioneered a new type of slasher film: industrial grunge. The grainy cinematography coupled with the remnants of industrial farm life – rusty wheelbarrows, sledgehammers, and even…chainsaws (gasp!) – create the perfect atmosphere for the story to take place. Position a grimy, unsanitary slaughterhouse as the backdrop, and voilà! You’ve got yourself an innovative and terrifying horror flick. The characters were quite the new breed for horror films as well. These rural Hillbillies are unsophisticated, uneducated, and unkind to city-slickers. These newfangled film techniques that scared audiences everywhere to bits in 1974 inspired a host of backwoods horror films: The Hills Have Eyes (1977), Motel Hell (1980), Wrong Turn (2003), pretty much any movie you can think of with a rural family having a vendetta against city-folk.

Sally, her wheelchair-bound brother Franklin, and a group of friends go on a trip to their family’s farmhouse to visit her grandfather’s grave after hearing reports of it being vandalized. They soon find out that the family living next door are not-so-friendly neighbors. The group is terrorized by a chainsaw-wielding maniac, the iconic Leatherface (Gunnar Hansen), who just so happens to wear a mask made of human flesh.

The film can also be credited with popularizing now-standard horror movie tropes, such as the “Final Girl”. We all know her, the girl who is tormented by the masked killer and is left to fight or flee as her friends are killed off one-by-one. Most people think that Jamie Lee Curtis from Halloween was the original Final Girl; however, it was Texas Chainsaw’s own Marilyn Burns that started it all. All in one day, Sally (Burns) is kidnapped, beaten, and chased relentlessly in the heat of the Texas countryside. She sits down to lovely dinner with a homicidal family while tied to a chair, just before she escapes by jumping through a window, and, finally, hailing down a random truck – making her escape, drenched in blood and laughing hysterically out of relief. Quite an accomplishment for a young, blonde city-slicker.

Although this film can be cringe-worthy and not for the weak-stomached, that is precisely what makes it a great horror film. The mise en scène, or atmosphere, places the audience right in the middle of the Texas backwoods in the sweltering southern heat fighting for dear life. So, put your best face forward and join the family!