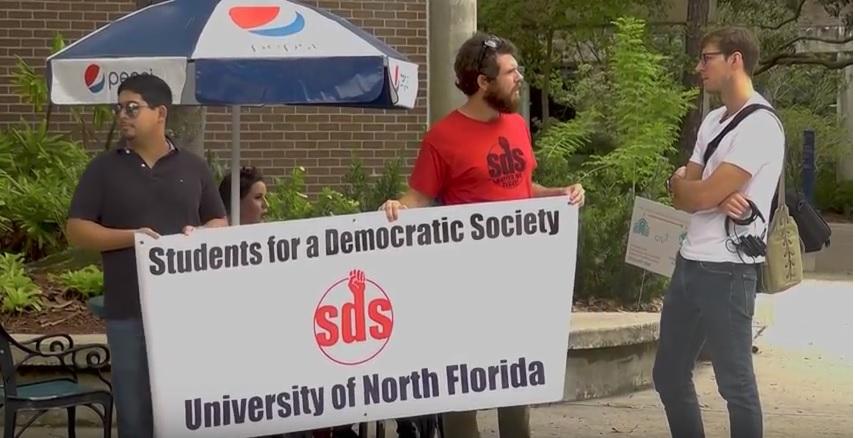 Members of Students for a Democratic Society (SDS) gathered in UNF President John Delaney’s office on Monday, as part of an organized “study-in.” Members gathered in Peace Plaza under the Martin Luther King, Jr. statue and then proceeded to march to Delaney’s office after a few short talks.

Faculty from the President’s Office, along with Delaney, were present at the meeting. Faculty handed out printed six-page responses to a series of demands made by SDS in the wake of a video posted by UNF student Zack Morse, allegedly mocking the Black Lives Matter movement. The list called on the university to make changes such as to further diversity of the faculty and the student body, create an African-American studies/diaspora major, ban Confederate symbols on campus and disarm all campus police.

Talks between faculty and SDS began with raising concerns over the university’s response to Morse’s allegedly racist video, with members critiquing Delaney’s lack of transparency and immediacy with regards to punishment. Delaney responded by explaining the importance of due process of the law and a fair investigation into the students accused, likening demands of immediate action to a “lynch mob.”

Cultural diversity courses were also discussed. SDS President Monique Williamson, along with several others, contended that diversity programs, courses, and initiatives needed to be expanded so as to educate UNF students on issues of race. Mark Dawkins, dean of the Coggin College of Business, detailed courses currently in available and efforts to see them expanded.

Williamson suggested that the Morse case is an opportunity for the university to set a precedent with regards to incidents of racism from UNF students, invoking the fact that most similar cases nationally have been dealt with by suspension of the students involved. Delaney still stressed the importance of patience, ensuring that the accused students are “treat[ed] like human beings,” and conducting a proper investigation into the matter.

Originally intended to last from 10:30 a.m. to 5:30 p.m., the study-in, which had a distinct lack of studying, was suspended earlier than expected due to immediate addressal by Delaney and staff. When asked, SDS members present said the meeting was productive and that meaningful progress was made.