North Florida squeezes out an overtime victory against Eastern Michigan 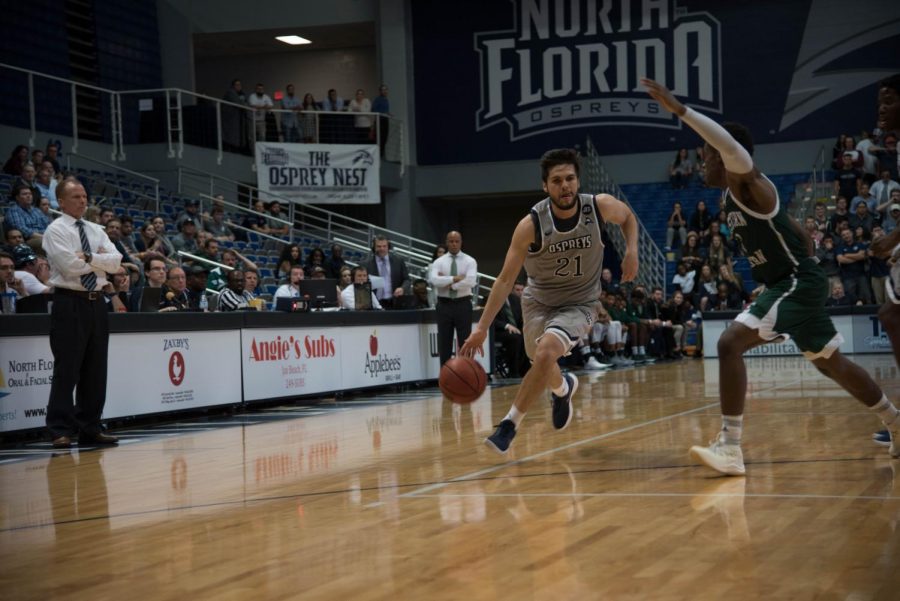 It came down to the final buzzer for the North Florida Ospreys’ (2-7) to snatch an 84-81 overtime victory over the Eastern Michigan Eagles (5-2) in front of their home crowd Nov. 29.

This isn’t the first time Elijah Minnie, Eagles’ forward, faced the Ospreys. The three-point shooter who has been in a scoring funk, and hit none from downtown in this matchup,  previously played for Robert Morris during his freshman season during the NCAA tournament run in Dayton, Ohio.

During the first half, North Florida and Eastern went back and forth; both missing scoring opportunities until readjustments were made.

A three-pointer from Ivan Gandia-Rosa pushed the Ospreys back on top just over five minutes into the game. It wouldn’t be the last time his range from beyond the arc would be a weapon in the night.

For the remaining minutes of the half, defensive stands and second-chance buckets proved to be a key as Eastern Michigan chipped away at their deficit. The Eagles finished with 21 second-chance points and 8 fast break points for the game.

North Florida headed into the halftime with a slim 38-31 lead over Eastern Michigan.

Despite a fast second half basket from the Ospreys, the Eagles began a comeback run to close the gap with each ticking second.

JT Escobar fouled out with 6:49 left in regulation and took his offensive power with him as he watched from the bench. Escobar closed out the night with 12 points with four made shots from downtown.

With just under a minute left in regulation, Eastern Michigan knocked down their second three-pointer of the game to tie the score at 74. One play later, the Eagles made a defensive rebound off of Wajid Aminu’s missed jumper and immediately sent themselves to the free throw line.

Gandia-Rosa answered with 8.2 seconds left on the clock with an unbalanced three-pointer that sent the game into overtime.

Throughout the tightly-matched up overtime, North Florida’s defense came together to stop Eastern Michigan’s final rally. Noah Horchler, a transfer, muscled down the stretch to hit the game-winning layup while surrounded by Eagles.

“They gave us length than was more than normal that we taped for the first time, that we taped in a while,”  Driscoll said. “And we really worked against their zone, on how we want to attack their zone and that’s why we shoot so well from three, we shot so well in the second half.”

Garrett Sams, who battled cramps throughout the game, scored a team-high 20 points.

The Ospreys committed 13 turnovers, just one less than the visiting team.

From the floor, Eastern Michigan shot 41.9 percent for the edge while North Florida made 39.2 percent of their shots.

The Birds of Trey continued their hot-handed shooting with 13 made out of 30 attempts. Eastern only knocked down two of their buckets from behind the arc but at crucial parts of the second half to keep the fans on the edge of the seat as the clock wind down.

The Eagles won the battle close to the basket with 54 points in the paint compared to the Ospreys’ 32.

Men’s basketball continues their season at home to face Trinity Baptist Dec. 2 at the UNF Arena at 7 p.m.