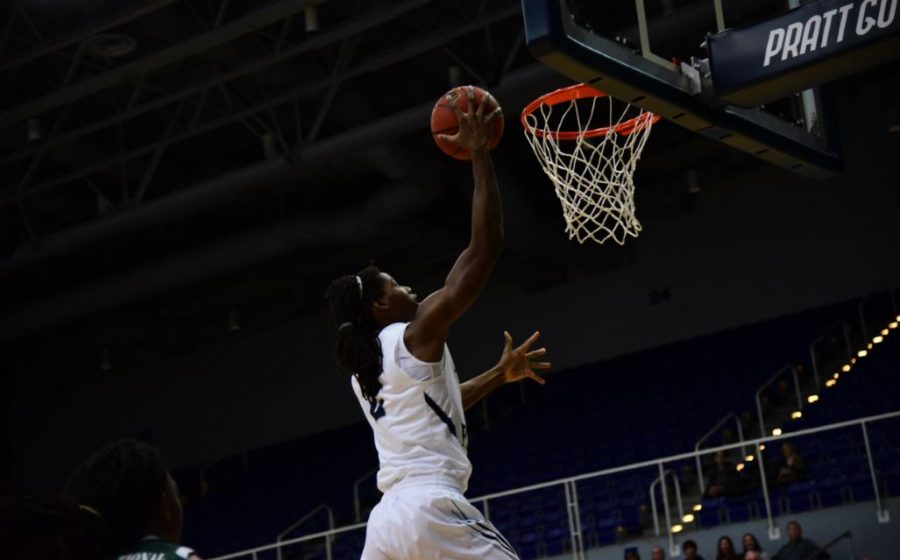 The men’s basketball team (6-11) closed out their non-conference slate with a dominating 104-70 victory over the Florida National Conquistadors to kick open the new year.

As in previous matchups over the break, the Ospreys shifted around its starting lineup with freshman Trip Day back in the rotation at the opening tip off over Noah Horchler.

As Day’s number was called from the bench, Head Coach Matthew Driscoll saw Day as a needed spark for the Ospreys. Day contributed 17 points throughout the game, and reeled in 10 off the glass.

In the opening minutes, Florida National stuck the first blow with a basket from behind the arc. North Florida quickly responded, and began the back and forth exchange early in the game.

With a dunk by Wajid Aminu, the Ospreys snatched the lead and did not let it go.

North Florida created numerous runs in the first half, especially after timeouts were called on the floor. Driscoll described how the team followed their usual plan of making use of the time in order to have an energetic defense, which leads to a flowing offense.

“The one thing we always try to talk about is good, better, best, never let it rest. Your good is better, your better is best,” Driscoll said. “We do that after you get stops. It makes life a whole lot easier on the other end, and we just told the guys we got to maintain.”

At the break, North Florida held a commanding 42-26 lead over Florida National.

With the second half action resumed, the Ospreys continued to work to widen the gap over the Conquistadors. North Florida’s defensive presence held Florida National to under 30 percent from the field.

Redshirt senior Osborn Blount touched on the bench’s productivity, which outworked Florida National’s 47 to 27 in points.

“They all did a good job.” Blount said. “Great energy off the bench, especially Emmanuel [Lambright] with those rebounds, snatching them out the air.”

By the end, Blount had 16 points for the night. Driscoll highlighted Blount and Day as the usual one-two-energy punch from off the bench that can be compared to former players Demarcus ‘BaeBae’ Daniels and Trent Mackey.

North Florida finished just over 47 percent completion from to the field compared to 28 percent of Florida National. The Birds of Trey knocked down 16 from behind the arc while the Conquistadors only made four. The visiting team threw up 87 shots attempts while North Florida had 71 from the floor.

Terence Johnson, Florida National forward, had a game-high 20 points and pulled in 10 rebounds.

For the Ospreys, JT Escobar finished his night with 18 points, and led four other teammates in double digits. Freshman Emmanuel Lambright had a team-high 13 rebounds while knocking in 10 points. Day described how his roommate, Lambright, added another dimension on the floor.

“He just went all out.” Day said. “He didn’t care about anything. He was just gonna go up for rebounds.”

Heading into conference, the Ospreys are preparing the same way since the beginning of their schedule. They believe their time on the road has brought them closer together, and it could be used as a tool during those tough moments in the league.

The men’s basketball team starts off their ASUN play with the River City Rumble against crosstown rival Jacksonville University Dolphins. The game will take place on Jan. 6 at the UNF Arena at 7 p.m.