Your Voice: Students voice their opinions on safety and discrimination at UNF 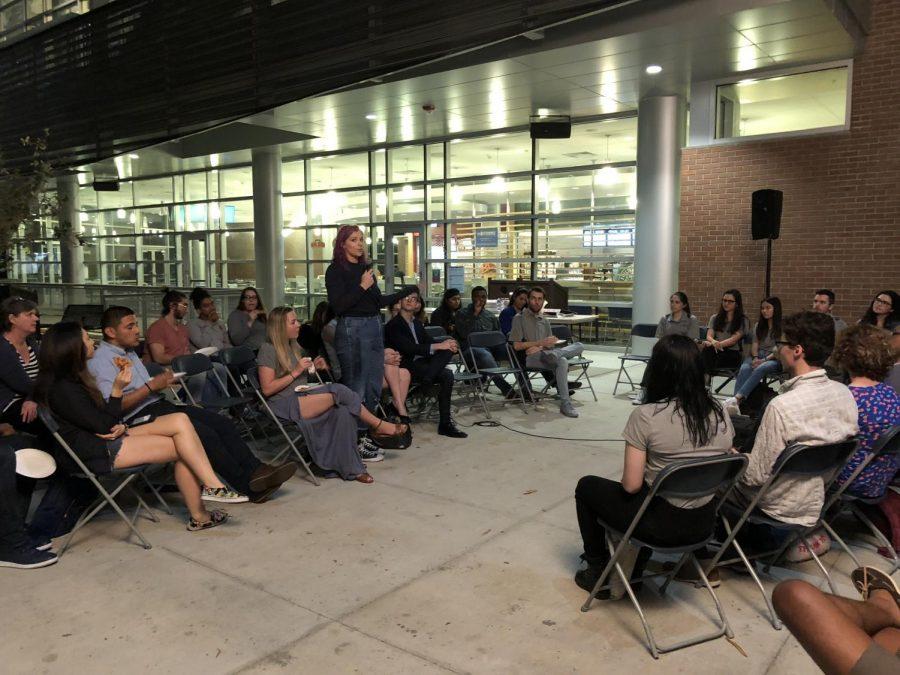 In society today, discrimination is often discussed across America and even the world. More locally, a discussion hosted by Student Government was held on Feb. 26 in the Student Union to talk about these issues and possible solutions. Students were given the opportunity to share their experiences and voice their opinions.

The discussion began with Senate President Nina Lee asking if anyone had ever felt uncomfortable or unsafe on campus. Students talked about safety on campus as well as racial, sexual, political and religious discrimination.

Elections Commissioner Aesha Soliman said walking to and from her car at night can be scary because there aren’t enough lights.  Senator Madison Brantley mentioned several situations that made her feel uncomfortable from “catcalling” to being confronted by different religious groups on campus.

One student mentioned the incident last semester involving a former KKK member Ken Parker on campus. The student said she missed her classes because she didn’t come to campus for two days. She also went out to buy a knife for protection.

Lee moved the discussion along asking if anyone had felt fear in modern culture.

One student said people seem to be so open, but believes this isn’t really the case. Several students spoke about receiving negative looks from people when wearing a Jewish star necklace or a shirt with “Trump” written across the front.

As a member of the queer community, Government Oversight Chairman Kyle Cohen said he sometimes feels uncomfortable around people who openly say he will go to hell for his choices.

Regarding religious discrimination, one student feels like individuals who don’t believe in a monotheistic religion are at a disadvantage. He pointed out that most things revolve around Christian ideas and holidays.

This brought up discussions about how most holidays are overlooked with the exception of Christian holidays. One student said Octoberfest was held on the holiest day on the Jewish calendar, and she wished more religions could be represented.

“It’s like a slap in the face,” she said. “It’s like our existence is being erased by UNF.”

Some students then suggested UNF should offer more food choices for religious restrictions. These students stated there are places for vegans and vegetarians, but no Kosher options on campus.

When asked what effect they think their sex, religion, gender or abilities has on other people, one person told a story about a time he went out to lunch with his mother. They were both speaking Spanish, and the woman sitting next to them got up and moved. He said he overheard her tell another person it was because “those people speaking Spanish sat next to me.”

That student said, “It’s good to see different races come together [here] and talk about these [issues].”

Another student said he believes there are three solutions to not being poor—basically, if you graduate high school, don’t have kids out of wedlock, and hold a job, you can be successful. Other students disagreed saying “every person’s situation is different.”

These other students believe there are many other things that should be taken into consideration. One student said his father, an educated Middle-Eastern man, struggled with discrimination after 9/11. A student who wears a hijab said she is less likely to be hired, and more likely to be shot.

Chief of Staff Gloria Turner said, students, no matter what race, religion, gender or anything else you identify as, can make a change by joining clubs or student government.  Soliman believes we should move past words and lead by example.

“If you want to make a difference, get involved,” Turner said.

Some other solutions to these problems are engaging with each other more, being mindful of others opinions, and respecting each other.

There will be an open forum on March 26 at 7:30 p.m. in the Student Union Ballrooms for anyone with concerns or opinions to come and share their voice there.