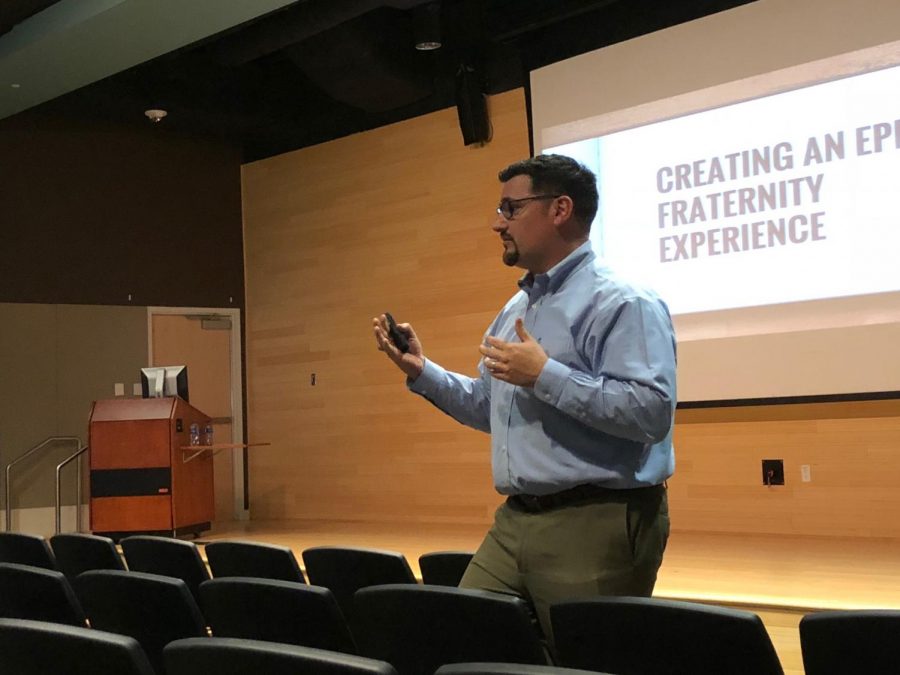 E.B. White once said, “I get up every morning determined to both change the world and have one hell of a good time. Sometimes this makes planning my day difficult.”

“How do we have one hell of a good time and change the world?” NovakTalks speaker Joshua Welch asked a crowd of sorority and fraternity members.

In an answer, he said, “There are three steps for becoming an epic fraternity or sorority.”

The UNF Interfraternity Council hosted Welch to speak about accountability and self governance in fraternities and sororities on April 3. Welch belongs to Sigma Alpha Epsilon fraternity, and served the Greek life community for about 10 years. Welch is the associate director of fraternity and sorority life at NC State University, but is also a facilitator for NovakTalks. He has visited over 120 campuses.

So, what are those steps to becoming an “epic” Greek organization? According to Welch, those steps are to set expectations, design interventions to help members meet those expectations, and hold each other accountable.

With these steps, a fraternity or sorority can be self governed. Then, the organization, and therefore community, will benefit from it.

”I’m a firm believer that there is no other experience on a college campus that can offer the holistic student development practice and experience that fraternities and sororities can,” Welch said.

Welch started off his speech by asking the crowd a rhetorical question, “What were you looking for when you decided to join your organization?”

He added that when joining a Greek organization members willingly make oaths that hold them to a higher standard. Welch joked this could even look like members kneeling on the floor, being sworn in with a tap of a sword on the shoulder.

Welch then asked the crowd how far their fraternity or sorority has strayed from these goals over the years considering the vision, members and events. This led to the mention of the four fraternity members, who had similar goals and dreams, whose have been lost to alcohol within the last year.

He explained these dangerous situations could be avoided, and asked them if they were holding each other accountable to those oaths and standards they made in the beginning.

Drugs, alcohol, hazing and sexual harassment–these are what Welch called barriers to success. He explained that even if those barriers weren’t a problem in the organization, it is all around us in society and can easily invade. According to Welch, there is a risk of corruption, and contributing to that risk is inaction.

“Sometimes inaction can be worse because even if that negative influence is graduating, their actions may have multiplied 8 times in the younger generation,” Welch said.

Welch encouraged the crowd to do the right thing, which to him meant always getting help for someone if they need it.

“Make the call and get medical support for someone,” he said, bringing him to the point of medical amnesty.

With medical amnesty, you can call for help if someone overdosed on drugs or alcohol, and you will not be punished for the consumption of that substance.

In regards to holding each other accountable, Welch said the best experience he had was with a group of men in prison who formed their own kind of fraternity. One of the members was slouching against the wall during line up one day when another member said, “pull up.” Immediately, the man slouching stood up straight.

The men kept each other in check to make sure their group was always represented properly, demonstrating what they stood for.

“If they can do it, surely fraternities and sororities can do it too,” Welch said.

Welch hoped to encourage the members with his closing statement, where he said: “Every single day, ask yourself what you are doing to re-earn the right to wear your letters?”