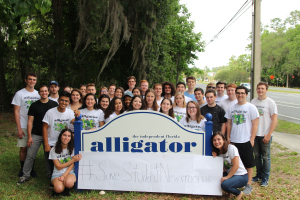 The Daily Campus, a student-run news organization for Southern Methodist University, has been one of several student-run independent newspapers to close its doors due to lack of funding. They will have to be re-affiliated with their university starting in May, meaning that the University itself can censor what goes out to the students.

The campaign will be on Wednesday, April 25 and the goal of the hashtag is to flood social media with the best work of the student newspapers, current student and alumni testimonials, and links to personal donations of student-run newspapers across the country.

The Spinnaker is funded by UNF Student Government but is not in any way censored by SG or the University. Some university funded newspapers cannot say the same.

On April 25, Spinnaker will be posting editorials from current and previous staff members regarding the importance of having an independent student-run newspaper.