Opinion: There is a big difference between noble patriotism and toxic nationalism 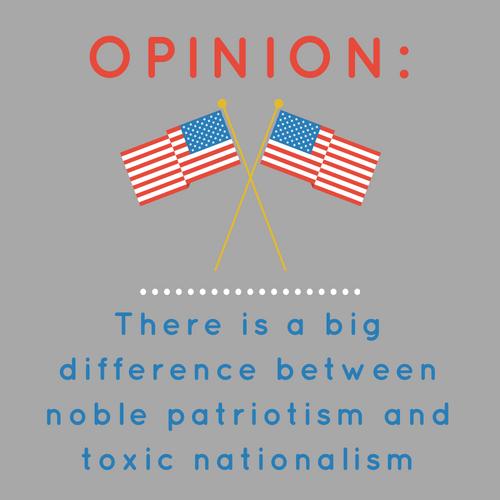 Around the world, there are several countries experiencing waves of nationalism, and many people are rightfully concerned. It is altogether called the global far-right movement. More governments are becoming nationalistic, displaying strong aversion towards the unknown or the unfamiliar, prejudices often thought dead are openly displayed, violence seems to be more commonplace and so on. What is happening?

Firstly, don’t panic. Though it seems things are gloomy, it is sad but not surprising to note that these phenomena are not unusual. We must clear up things by properly classify behaviors. Therefore, let’s discuss the difference between nationalism and patriotism, and understand the consequences for each concept.

According to the Merriam-Webster dictionary, nationalism is defined as “loyalty and devotion to a nation.” What can possibly be wrong about a person feeling strongly connected to his or her nation? Well, the definition does not end there. It goes on to say  “a sense of national consciousness exalting one nation above all others and placing primary emphasis on promotion of its culture and interests as opposed to those of other nations or supranational groups.” This concept is arguably extremely dangerous.

One of the synonyms of nationalism is chauvinism, which in turn is connected to fanaticism, as well as ethnocentricity. It implies a sense of superiority, often accompanied by violence over those who are different. It makes people feel dominant, become self-centered and close-minded about the world and its complexities. When someone is a toxic nationalist, that person disregards culture or other social elements.

Another common synonym of nationalism is patriotism, but the differences must be explicitly stated. Similar to nationalism, patriotism does foster a feeling of strong connection to the nation or state. It does not rely on nostalgia, however; it recognizes that citizenry can be varied because such a thing does not have a specific look or culture. Patriotism requires civic duty and active participation in the continued well-being of a country. It is forward-moving and forward-thinking. Ultimately, no patriotic person feels superior to someone else.

Nationalism has unfortunately been linked with the worst of history and, of course, recent events such as the election of Donald Trump, Matteo Salvini, etc. It is a perpetrator of imperialism. It was used as an excuse to commit genocide and other unspeakable atrocities, and it also cultivates this culture of “otherness” and ignorance that endangers everyone else not fitting into the set standard. However, nationalism itself doesn’t have to be that bad.

Nationalism has helped in the past in the fight against imperialism, especially for old colonies. There are arguments favoring inclusive nationalism, which can be explained as people of different ethnicities, races and other social constructs coming together to build and support a nation by primarily being as inclusive and tolerant as possible.  Andreas Wimmer, a professor at Columbus University, said it best: “National identities can encourage collective solidarity and lead people to work for a shared common good.”

As positive as this twist of argument can be for nationalism, this hopeful definition is not what’s being displayed within the U.S. currently.  The inherent problem with nationalism is the aspect of superiority. In a country like the U.S., if every group felt nationalistic, nothing would be solved because each group would consider their “nation” to be the only form of acceptable nationhood. Nationalism does not achieve common ground for everyone, which is what the U.S. and other countries desperately need.

Everyone should strive to be as patriotic as possible because it will always help the country as well as those who live in it. To end all of this on a more joyful note, happy Fourth of July!